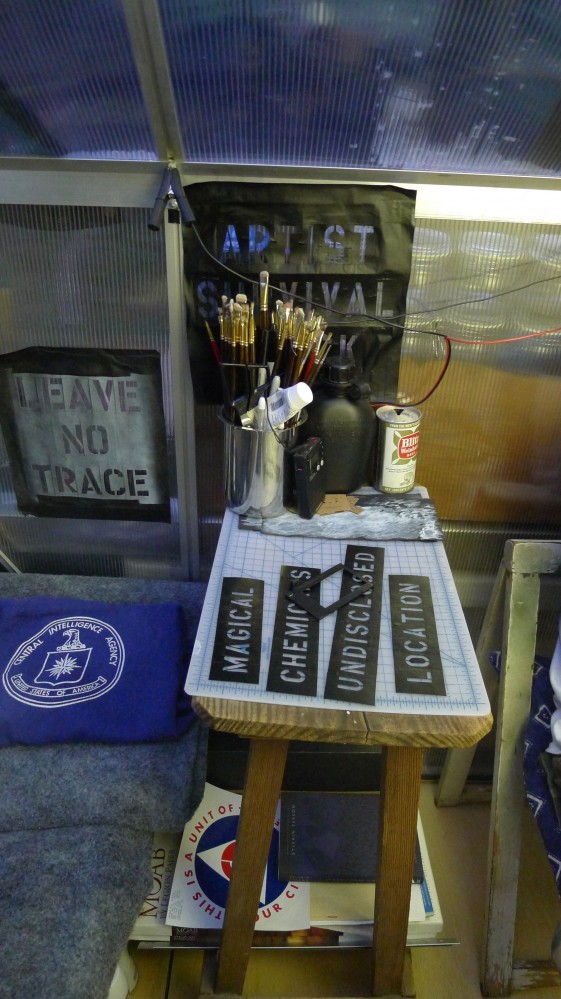 Surviving As An Artist
By Tracey Jackson

Being an artist is hard. It’s often not an issue of talent but survival of the fittest. There is a deeply Darwinian aspect to it.  One might not call him an artist by any stretch of the imagination but Dick Wolf who brought the world fifty versions of   Law and Order once said, “The person who survives in show business is the person who stays in show business.”  This can be true of all disciplines of the arts.

While Adam Stennett is not pop TV producer he is a visual artist and  his latest work The Artist Survival Shack addresses some of these issues along with many others.

On August 1, 2013, Adam Stennett began a month-long installation/endurance performance, living and working in a 6.5 x 9.5 foot, self-sufficient, off-the-grid survival shack at an undisclosed location on the East End of Long Island. The supplies, food and water he arrived with were all he had access to, and he did not leave the area for the thirty-one day duration of the performance. This exhibition is the culmination of that experiment.

The Artist Survival Shack project has developed over the last several years, its impetus based in the artist’s struggle to carve out time and space to make artwork in an economically and spiritually challenging environment. It is a study in what is really necessary for an artist to live and thrive, and it functions on both serious and absurd levels.

The Shack calls attention to the outsider/outlaw role artists have traditionally been accorded by society and draws an implicit, and uncomfortable, parallel between the activities of the solitary artist pursuing his vision and those of the lone madman plotting havoc. The project is meant to raise varied themes—ranging from environmentalism, green design, sustainable agriculture, mind-altering substances, visionary states, and utopia, to paranoia, separatism, surveillance, security, economic collapse, and apocalypse—and to hold them all in an uneasy tension.

When Stennett came out of his shack for a brief spell the other day it was his first time in the company of other people for twenty-six days.  He was present but one could see for the first few minutes he was doing some serious adjusting.

I was very moved and intrinsically  understood when Adam spoke about the artist having to fight for a space in the world; a space where they could survive financially by merely doing their work. Every artist suffers from the overriding fear that his livelihood could be in jeopardy at any given moment.

Is this my last gallery show, my last book, my last film, my last sale?  If there is a next one will it be a success and lead to the next step, or will it be a failure and I will go back to the beginning and wait tables or have to teach?

While Stennett is living out in the “wild” without anything but himself and a few supplies for survival he is meditating on this and other topics. But this search for what it takes for an artist to survive led him to the literal act of survival. In the  one month of this Thoreau type existent would he find the answers?  While facing his fears might he in the process lose them?  And of course, ultimately what is the most important thing for an artist – what kind of work might come out of this?

Stennett is very talented and deeply contemplative. I think The Artist Survival Project has not only erased some of his very primal fears, but it has and will take his work to a new level.

The entire project will be on display at Glenn Horowitz Booksellers in East Hampton for the next month.