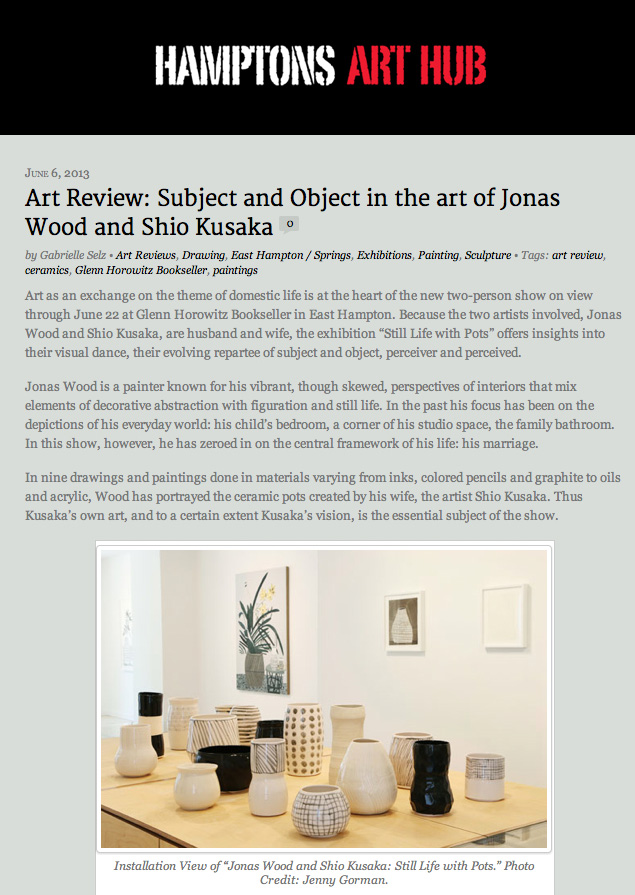 Review: Subject and Object in the Art of Jonas Wood and Shio Kusaka

Art Review: Subject and Object in the art of Jonas Wood and Shio Kusaka
by Gabrielle Selz

Art as an exchange on the theme of domestic life is at the heart of the new two-person show on view through June 22 at Glenn Horowitz Bookseller in East Hampton. Because the two artists involved, Jonas Wood and Shio Kusaka, are husband and wife, the exhibition “Still Life with Pots” offers insights into their visual dance, their evolving repartee of subject and object, perceiver and perceived.

Jonas Wood is a painter known for his vibrant, though skewed, perspectives of interiors that mix elements of decorative abstraction with figuration and still life. In the past his focus has been on the depictions of his everyday world: his child’s bedroom, a corner of his studio space, the family bathroom. In this show, however, he has zeroed in on the central framework of his life: his marriage.

In nine drawings and paintings done in materials varying from inks, colored pencils and graphite to oils and acrylic, Wood has portrayed the ceramic pots created by his wife, the artist Shio Kusaka. Thus Kusaka’s own art, and to a certain extent Kusaka’s vision, is the essential subject of the show.

Kusaka is recognized for her creations of elegant, minimalist forms that incorporate both fine porcelain and the unglazed technique of raku. The 17 vases and pots in the show range in size from 5” to 12”. They are slightly uneven vessels covered with white, grey and black glazes that manage to appear fragile and utilitarian, pristine and unpretentious, at the same time.

Geometry is at the heart of both Kusaka’s and Wood’s aesthetic. Kusaka uses lines, dots, grids, and of course shapes, to explore form. Then she clusters her spherical pots in groupings on the counter surface, creating an intricate design of corresponding volumes and weights. On the other hand, Wood plays with the geometry of combinations, the layering of patterns and objects within the contorted spatial orientation of his picture plane. And while the work of both these artists has a distinctively homespun quality, the charm of their subject matter and technique belies sophistication.

In the oil and acrylic painting, Still Life with Van Gogh Book, Wood expertly unites a multitude of components—the decorations on the rug are reminiscent of Matisse, the airy arrangement of the suburban scene recalls David Hockney—with a vivid yellow orchid that practically zings out of one of Kusaka’s pots and punctuates the canvas.

A few feet away, Kusaka’s Stripped 82 sits on the counter. Its oblong shape and glazed surface echo the plant holder, the hatching in the top left corner, and the coffee mug that her husband has depicted in the foreground of Still Life with Van Gough Book.

Whose work showed up in the other’s first is unimportant. What’s interesting is the way they both look at the same scene and take different elements away, the way they comment back-and-forth on each other’s way of looking.

Of course, when viewers see a show whose overriding image is a vase or a pot, many will think of the Italian 20th century painter Giorgio Morandi. Wood’s 5 Pots, another oil and acrylic painting, has the same simple composition of a Morandi still life, but while Morandi’s paintings were delicate studies done in subtle tones that invoked the solitude of objects, Wood’s 5 Pots is a bold and forthright painting, a fellowship of his wife’s pots displayed against a rich, royal blue backdrop.

Historically, still-life paintings—the paintings of objects without the human form—are depictions of ordinary life: vases full of flowers and bowls stuffed with fruit. But they can also be infused with symbolic significance. In his last Still Life, done in 1940, Paul Klee used the objects on a table to refer to the allegorical battle of death over life: he was dying at the time. And Picasso painted Still Life with Steer’s Skull, 1942, as a commentary on war during the years of Nazi occupied France.

By focusing on the depiction these solid, open-mouthed receptacles as both subject and object in their work, both Kusaka and Wood are showing us not just the everyday objects in their world or the grace of arranged geometry. Rather, they have landed on the central motif of their union, the symbol of the container.

In their work, the pots and vessels can be seen as a metaphor for the emotional container of marriage: a graceful yet sturdy vessel that holds within it the elements that make up their domestic life. A womblike receptacle created by Kusaka then enfolded and embraced within the frame of Wood’s picture. For that is what a marriage is, a container for a relationship or, in this case, the sublime duet of artists’ Jonas Wood and Shio Kusaka working in a unique tandem dance.