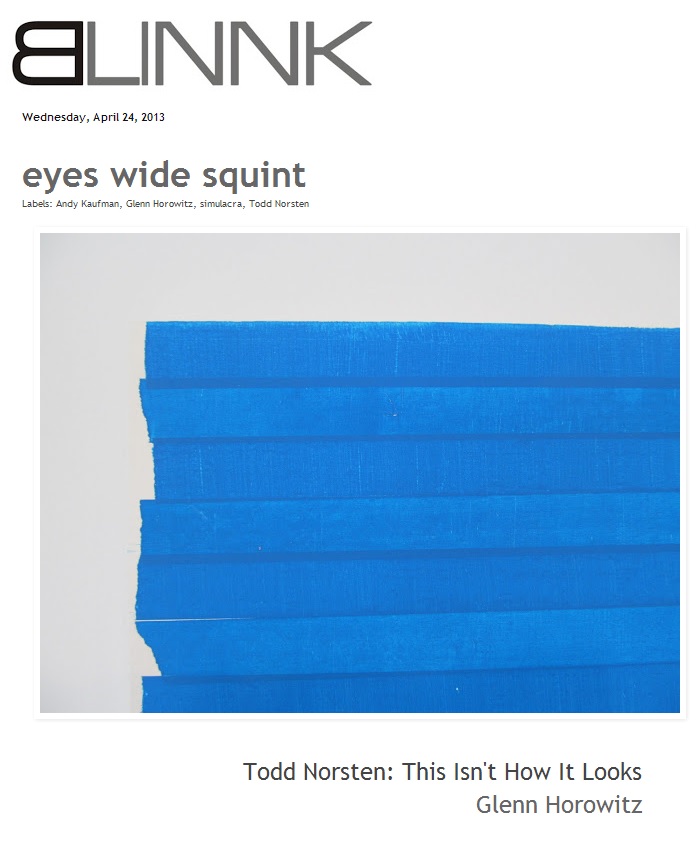 Todd Norsten: This Isn’t How It Looks

Todd Norsten is a Minnesotan whose long visual arms have stretched across continents landing everywhere from The British Museum to the 2006 Whitney Biennial. And no wonder — the twenty five neat rectangles on exhibit at Glenn Horowitz are a sublime mash up of art and artifice.

Norsten paints in a hybrid of the trompe l’oeil tradition and the paintings here — cheeky, subversive and oddly sentimental — will take you completely by surprise. Invoking a sort of non-compliant formalism in these complex works, it’s clear that Norsten — despite what it looks like at first glance — revels in the tenets of modernism and post-modernism. His mostly minimal imagery is possessed by a sumptuousness that is based as much in the process of painting as it is in linguistics. The painterly seductions are lucid but elusive, bouncing from content that is crisp and cunning to a methodology that employs a jaw-dropping level of craftsmanship. Look closely, because the appearance of casualness here is a ruse. What seems to be a crisscrossing field of strapping tape is not. It’s painted by hand and it just looks uncannily like strapping tape (with a few scatological bits of dust that are actual dust as opposed to dust simulacra…). I don’t know — call me seduced — at this point I could be convinced of just about anything. These works are that surprising. The paintings are cool and white, with content that bounces between jokily flatfooted text to variously cunning or surreptitious visual antics and painterly invention. Celebrating a broad swath of contradictions, idioms slam against one another as they collide with the picture space in a frisky, mind-against-matter tumult. Norsten pushes paint around, too, with joyfulness — often slathering sticky fields of pigment over the face of what looks like a finished painting or troweling it across the surface like so much grout. He sometimes bullies the paintings and other times his approach is gentle, even salacious. His reverence for fine art is most manifest here. So — this is where paradox went. While the act of counterfeiting strapping tape, rubber stamp impressions and commercial fonts is fascinating enough, Norsten is working in the service of a larger concept. Taken altogether, the conversation begins with issues of authenticity, ending somewhere in the realm of what exactly is painting now? If Norsten were a performer he’d be Andy Kaufman, the artful and duplicitous satirist of the 1970s and 80s, whose puzzling comedic exploits continue to intrigue. I saw Kaufman in 1979 at Harrah’s in Reno, in a vast dinner theater of red velvet, surf ‘n turf and booze, and that performance remains one of the most captivating, unsettling and obtuse events in my memory.  He emerged on stage as one of his alter-egos, a sleazy, incompetent lounge act who jumped rope, pounded congas, paused, sang poorly, paused again. The audience laughed nervously, shifting in their seats. The show went on (and on) to what soon was a silent crowd. Suddenly — a piercing stage light illuminated Kaufman and in a single motion he tore off his clothes revealing another alter-ego, this one dressed in a rhinestone-encrusted white suit, shiny shoes and bell-bottoms. He picked up a microphone and became — and I mean became — Elvis. It was extraordinary. Strobes flashed back and forth as he shimmied and shook, crooning with the voice of an angel. The thunder-struck audience went wild with applause. It was a non-sequitur of spectacular proportions. Not such strange bedfellows, Andy Kaufman and Todd Norsten. Both artists trade on authenticity in a way that is beguiling, elliptical, a little preposterous and filled with incongruity. And that incongruity translates into subject matter. Norsten converts our ubiquitous blue tape (below) into a verb. It’s not painter’s tape — it’s painted to look exactly like painter’s tape — and I think it’s fair to say that the viewer’s apprehension of that fact becomes a part of the painting. It’s not unlike the way Kaufman inhabited his alter-ego, Tony Clifton, when he was transformed into Elvis. (To be clear, Andy Kaufman was pretending to be Tony Clifton, but Tony Clifton wasn’t pretending to be Elvis. The manifestation of Elvis almost seemed to be coming from a third party — or from Elvis himself. In that way, it was different from an impersonation. It was Elvis. Or, at least it felt that way). In Norsten’s methodology, we experience the opposite of a xerox of a xerox of a xerox — there’s something alive and in person in this transformative work, and it seems to be happening right before our eyes.   Both artists beg the question: where is the art located? Is it in the language, the obfuscation, the sleight of hand, the facility? Like Kaufman, Norsten’s craftsmanship provides a road map that walks the viewer into the broader content — an endorsement, of sorts, that legitimizes the work. But after thinking about the uncanny nature of the paintings I couldn’t help wondering — what if it really is strapping tape? Sort of like, what if Elvis really isn’t dead? If Norsten was pretending that actual strapping tape was a tour de force paint job and, in fact, it really was strapping tape, how would the art and all of the ramifications related to it, change? In other words, where do we locate the art?