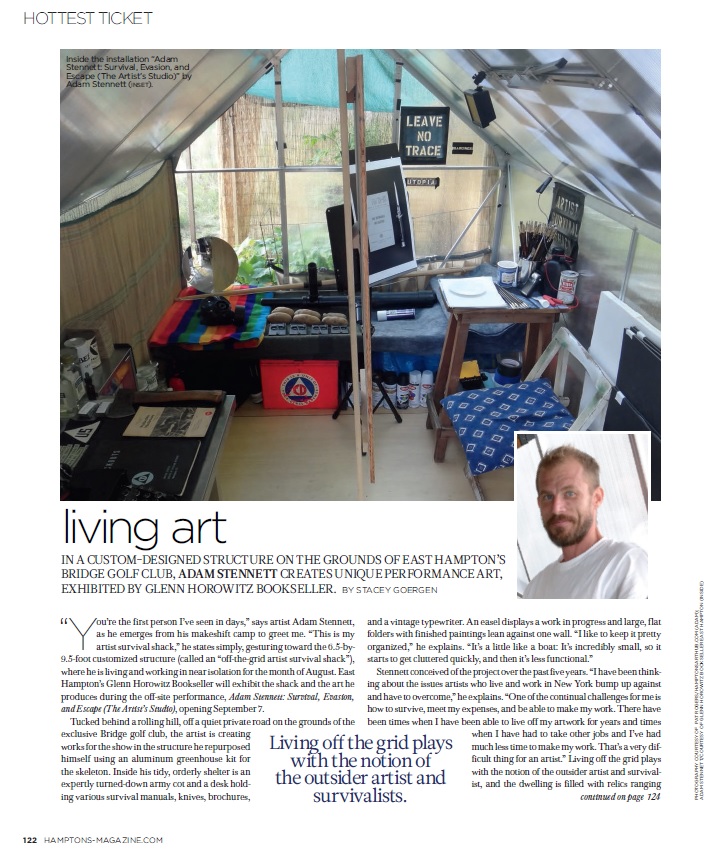 “You’re the first person I’ve seen in days,” says Adam Stennett, as he emerges from his makeshift camp to greet me. “This is my artist survival shack,” he states simply, gesturing toward the 6.5-by-9.5 foot customized structure (called an (“off the grid artist survival shack”), where he is living and working in near isolation for the month of August. East Hampton’s Glenn Horowitz Bookseller will exhibit the shack and the art he produces during the off-site performance, Adam Stennet: Survival, Evasion, and Escape (The Artist’s Studio), opening September 7.

Tucked behind a rolling hill, off a quiet private road on the grounds of the exclusive Bridge golf club, the artist is creating works for the show in the structure he repurposed himself using an aluminum greenhouse kit for the skeleton. Inside his tidy, orderly shelter is an expertly turned-down army cot and a desk holding various survival manuals, knives, brochures, and a vintage typewriter. An easel displays a work in progress and large, flat folders with finished paintings lean against one wall. “I like to keep it pretty organized,” he explains. “It’s like a boat: It’s incredibly small, so it starts to get cluttered quickly, and then its less functional.”

Stennett conceived of the project over the past five years. “I have been thinking about the issues artists who live and work in New York bump up against and have to overcome,” he explains. “One of the continual challenges for me is how to survive, meet my expenses, and be able to make my own work. There have been times when I have been able to live off my artwork for years and times when I have had to take other jobs and I’ve had much less time to make my work. Thats a very difficult thing for an artist”. Living off the grid plays with the notion of the outsider artist and survivalist, and the dwelling is filled with relics ranging from bomb shelter manuals to conspiracy-theory documents. Stennett assembles these objects, photographs them, and uses photos to make his paintings. The exhibition will also include an arrangement of artifacts in vitrines.