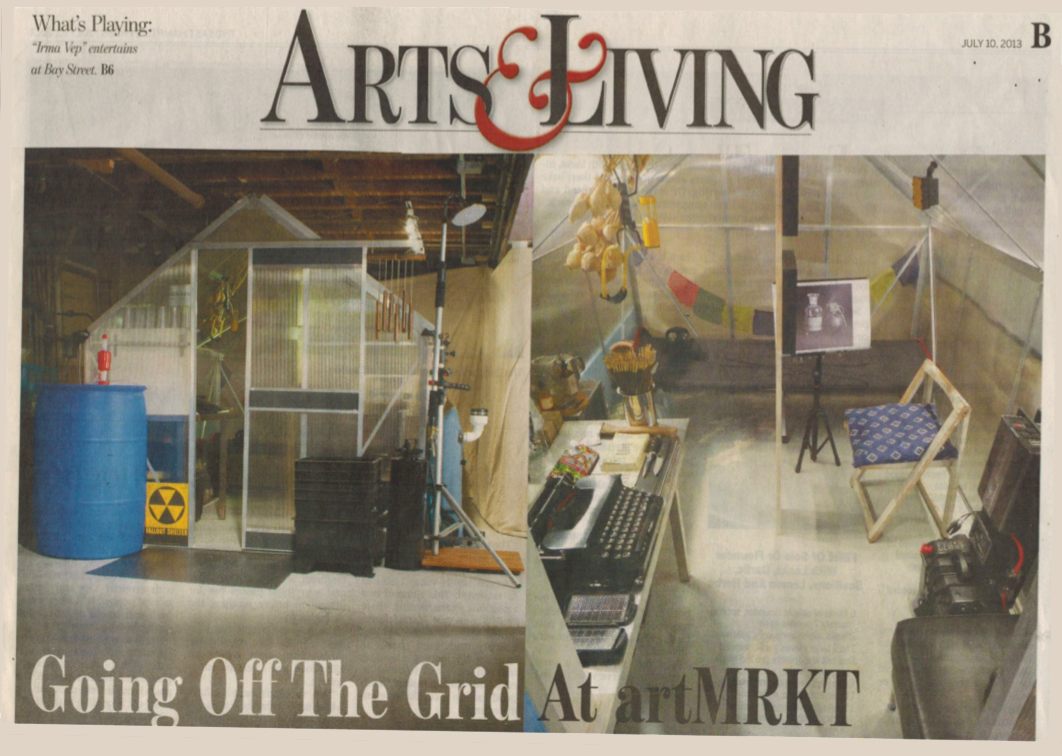 East Hampton Press: Going Off The Grid at Art Mrkt

Getting Off The Grid At artMRKT
By Michelle Trauring

The 96 hours of artMRKT Hamptons will be a test for Brooklyn based painter Adam Stennett. The clock will start ticking on Thursday, July 11, at 6 p.m. and won’t stop until Sunday, July 14, at 6 p.m. Early on Thursday morning, Mr. Stennett
will arrive on the grounds of the Bridgehampton Historical Society and begin to set up for artMRKT. There, he will unpack his latest project, the Artist Survival Shack—a nearly 62squarefoot, modified greenhouse skeleton. Once the show is over, the Artist Survival Shack will move from the test stage and into a more concrete reality. Beginning August 1, Mr. Stennett and his vision will be camped out for the long haul; a monthlong artistic performance at an undisclosed location here on the East End. Starkly juxtaposed by the spate of surrounding estates synonymous with the Hamptons, the Artist Survival Shack will surely make a statement. Serving as a backdrop, the third annual art sale—all 23,000 square feet of it, not to mention millions of dollars worth of artwork from 40 international galleries—will be just steps
away, cofounder Max Fishko explained. “I think the scale of what we’re presenting has this casted assumption that comes along with it,” Mr. Fishko said during a telephone interview last week from his headquarters in Brooklyn. “If you have 40 galleries, the assumption is the galleries have been vetted a little bit, curated a little bit. They have been selected for particular reasons. It’s more of a true boutique, rather than a mall. We focus largely on contemporary work and the emerging and midcareer spectrum.”

Best known for his oil and acrylic work, 41year old Mr. Stennett fits right in with the contemporary artMRKT aesthetic, although his Artist Survival Shack will sit outside the venue. Conceptually, the shack is an amalgamation of Mr. Stennett’s life experiences: his love for building, science and art coupled with unrelenting struggle—bartering safety and comfort for artistic freedom while constantly warring over time spent painting versus satisfying his bill payments, he said. A potential solution is living off the grid, the artist explained last week during a telephone interview. He began about a year ago by buying a 6½ foot by 9 ½foot aluminum and polycarbonate greenhouse for $950. Then, he got to work. Outfitted with a 100 watt solar panel generator, a 55 gallon rainwater collection system, a solar hot water heater and shower, a 36 shoe pouch vertical grow wall and trellis, a worm composting toilet, an 11 gallon portable urine collection system and a variety of furnishings—including an army cot with mosquito netting, gas mask, solar stove and coffee maker using a parabolic mirror, pocket radio, rat traps, a sling shot, machete, Tibetan Buddhist prayer flags, vintage bamboo wind chimes, food, emergency water, clothing, laptop, typewriter, camera and, perhaps most important, his art materials—the bomb shelteresque Shack is completely selfsufficient, he said. Its use explores themes of environmentalism, green design, sustainable agriculture and utopia paired against separatism, economic collapse, paranoia and apocalypse.

Everything Mr. Stennett arrives in Bridgehampton with will be all that he has, as he is not allowed to leave the general vicinity of the Shack to pick up more supplies, he reported. This is meant to be a physically and spiritually grueling experience, he said, and his focus will be creating a new body of work, including paintings, video and a journal, which will be on display at the Glenn Horowitz Bookseller gallery in East Hampton this fall. “I hope this doesn’t sound totally insane,” Mr. Stennett laughed. “It’s something I’ve been thinking about for quite some time.”

Two weeks after graduating from Willamette University in Oregon, Mr. Stennett—who was born in Alaska—hopped a plane to New York with an Army duffel bag and nowhere to spend the night. He was young, fresh and incredibly naïve, he said. The year was 1994. He lived in raw, unorthodox spaces and dangerous neighborhoods, sleeping on a cot in his studio. “I found an apartment in Williamsburg. It was a bit different than it is now,” he said. “Forty artists living there, one place to get a bagel, one bar and everything else was boarded up. I got held up at gunpoint my first night there.” His goal has always been to work less and paint more, he said, and he thinks he has achieved it with the Shack. “What is the minimum someone can get by with to live and work, and what do you really need to be happy and do what you love?” the artist posed. “That’s what this Shack is about. Right now, I’m building this box, this crate, that when it opens up, it will become the floor of the Shack. The idea is that it can be pretty easily shipped or strapped onto the roof of my truck and taken anywhere in the world. You could set it up on the beach somewhere, the mountains somewhere. If you have a piece of land to stick it on, you’re set.” For starters, it will rest in Bridgehampton. And depending on interactions with his audience at artMRKT, he may release the Shack’s future location for bartering purposes: survival supplies for artwork. “I’m leaving parts of it openended, so it’s a surprise,” he said. “The crazier I go in a month in a shack, the more interesting the work may be, you know?” He laughed and said, “I don’t plan to go off the deep end.”