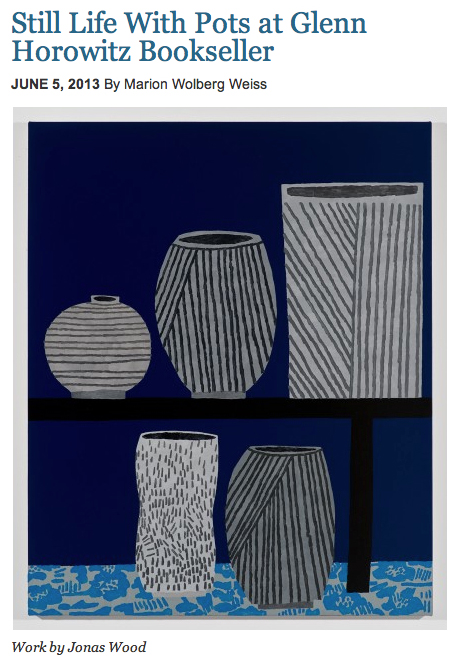 The title of the current show at East Hampton’s Glenn Horowitz Bookseller may seem a bit disconcerting, but we can assure you it’s not. Jonas Wood’s drawings/paintings and Shio Kusaka’s porcelain vases make a perfect pairing, although it’s not immediately noticeable. While the artists have never shown together before, the exhibit is all the more meaningful because they are also a married couple, having met as students at the University of Washington. What is also meaningful is the similarities in their work, which brings up an interesting point. Do artistic couples tend to influence each other? The answer remains ambiguous in this show, but it’s still challenging to observe commonalities, especially for both this art critic and Glenn Horowitz’s curator, Jess Frost.

Kusaka’s vessels convey a similar feeling of lightness and a bit of whimsy that provide comfort. Lines are also important in the vases, suggesting both structure and a sense of freedom. The same could be said of Wood’s linear composition. What’s particularly fascinating is the way Kusaka’s structure is in direct opposition to certain imperfections: for example, the mouth of a black vase is uneven; some markings (lines) are often not straight and wiggle across a work’s surface.

Wood’s drawings and paintings of interiors (not shown in this exhibit) have little in common with his wife’s works (although he sometimes uses some vases in an interior piece, like a dining room.) It’s curious to note that these interiors are also influenced by Matisse, with their elaborate patterns, and perhaps Greek urns, which Wood liked to draw. Another inspiration may derive from folk art, which features “flatness.” We are not suggesting that Wood is a folk artist, but the connection to his environment is similarly intense.

Many interiors, however, are similar to Wood’s own work in the exhibition. One of his drawings has a grid-like line that divides his vessels into separate spaces, recalling an interior filled with bird cages. (The grid configuration in the interior is much more delineated.) Another interior image of a greenhouse features diagonal lines on the roof, recalling Wood’s shapes in his current drawings at Glenn Horowitz.