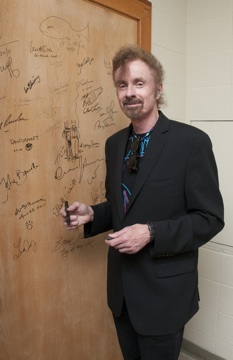 Boxing Up
By T. Coraghessan Boyle

My first short story for this magazine, back in 1993, was a piece called “Filthy with Things.” It concerns a couple so caught up in the mania of collecting and acquiring that they find their living space reduced to the odd trail wending its way through the mountains of precious stuff wedged inside their house. Finally, in desperation, they hire a professional organizer by the name of Susan Certaine, who solves the problem by hauling away everything but the standing walls and the clothes on their backs. To this day, people come up to me, their eyes shifting furtively and hands compressed in adjuration, to confess how deeply the story gnaws at them—this is true horror, and it needs no vampires or zombies to bring home its queasy truths.

I am not at all like the protagonist of that story—or that’s what I tell myself. I still have my vinyl records dating back to the sixties and still (once a month or so) go through the effort of cueing up the turntable to play them, though ninety-eight per cent of my listening time these days is devoted to digital recordings, which drift through the speakers with very little effort on my part. What else do I have? Books. My books are abundant, though, sadly, they seem de trop in a digitized world.

The real problem, the insurmountable one (short of hiring Susan Certaine), is my wife. She is the collector’s collector—or perhaps “hoarder” would be a more accurate designation. The most recent accounting, compiled by a team of distinguished archaeologists, determined that we now possess twelve examples of every article every manufactured in the history of humankind. Call this stuff precious, call it indispensable, call it clutter. In any case, it is troubling to me, as I like to think of myself as living in harmony with the natural world (and so in opposition to the culture of acquisitiveness into which we are all born—in this country, at any rate). I tell her you can’t take it with you, but amid the fierce rustling of the shopping bags and boxes she flings down on the kitchen table every hour or so, I don’t think she really hears me. I offer Tutankhamen as an example. He did manage to take it (his stuff, that is) with him, and look what happened to him. All of it has been dug up and stolen, and even now his mummified corpse is being paraded around the world.

Which is by way of saying that I myself am now forty-three boxes lighter, as I have just placed my archive with the Harry Ransom Center at the University of Texas in Austin. My feelings? I feel disburdened, I feel good, I feel like Samson awakening to the fact that the shackles have fallen from him, but the relief is necessarily tempered by a pang of nostalgia.

Since I began writing stories and novels in the early nineteen-seventies, I have kept every scrawled-over draft, every letter from friends and readers and my fellow writers, every rejection slip and review, as well as all the correspondence with my editors, agents and publishers around the world—and now I no longer have them. No matter that I never looked at any of them, ever, and that they remained thrust deep in their manila folders in the depths of filing cabinets and yellowing boxes imprinted with the logos of appliances long since defunct—they were there and they gave me weight. Of course, there is the consideration that all this paper I’ve been dragging around down through the years could have met a very different fate, masticated by rats and bugs, rotted, engulfed by mold, earthquakes, mudslides, or the flames of the wildfires that annually threaten this very old wood-frame house on the California coast where I am now sitting at the keyboard. At least the archive is safe and available to whoever may be interested in looking at it, now and in the future. And, as I say, the house is ever so slightly less crammed at this juncture—and more buoyant, too, like a land mass rising in relief once the glaciers have melted.

Serendipitously, it happened that the last stop on last month’s book tour in support of the paperback of “When the Killing’s Done” was Austin, and so I was able to visit the Ransom Center and see some of what is preserved there. What impressed me most, aside from the manuscripts themselves, was the freezer. On one of the many levels, with their mechanized shelves and climate-controlled atmosphere, there sits a deepfreeze the size of a small house. All suspicious incoming archives are deposited here and subjected to an alternating series of quick freezes (at minus twenty degrees centigrade) and gradual thawings, so as to protect against mold, insects, and any other living organisms that may have inhabited the late archivist’s living quarters. One of the book conservators even goes by the appellation of “The Bug Lady,” reflecting her training in entomology. I think of all that precious, friable, impermanent, and biodegradable paper and what certain species like the booklouse, the silverfish, and the cockroach might want to do with it, not to mention the lower forms of life. (I was praised by the staff, incidentally, for having delivered a particularly clean archive, sans insects, rodent feces, or the various substances that typically stain manuscripts—coffee, marinara sauce, and blood being the most likely culprits.)

The highlight of the day was when Megan Barnard, Assistant Director of Acquisitions and Administration, showed me samples of archives from three of my enduring heroes: Evelyn Waugh, Thomas Pynchon, and Jorge Luis Borges. The Waugh sample was of illustrated adventure stories the great satirist had written as a young boy, the handwriting overlarge and awkward, the drawings carefully colored and tending toward what an art historian might charitably call the naïf. The Pynchon included handwritten notes and an outline and draft fragments of an unfinished musical called “Minstrel Island,” co-written with his friend John Kirkpatrick Sale when both were students at Cornell in 1958. Most impressive, perhaps, was the Borges. One of the articles displayed for me was a handwritten manuscript of an essay identifying the books he would take with him to a desert island (the Encyclopedia Britannica was one of them, but then that’s cheating, isn’t it?). The essay was indited in a minute and impeccable hand, the script so small you would have needed a jeweller’s loupe to get comfortable with it.

What else? Well, that was all I had time for, at least on this visit. But simply to stroll through the cavernous rooms, gazing on all these works stored in their infinite ranks of identical boxes, was a sort of Borgesian experience, “The Library of Babel” come to life in this ephemeral world we call the real and actual. Of course, all of it is ephemeral, every last tick and jot of it, every slip of paper and hardbound book (Look on my works, ye Mighty, and despair!), and so are we and our spirits and the possessions that accumulate around us. And yet, at least for now, I can rest easy in knowing that my modest contribution to all this resides behind solid walls, in a climate-controlled atmosphere where insects are iced before they emerge and the depredations of time are kept rigorously at bay.