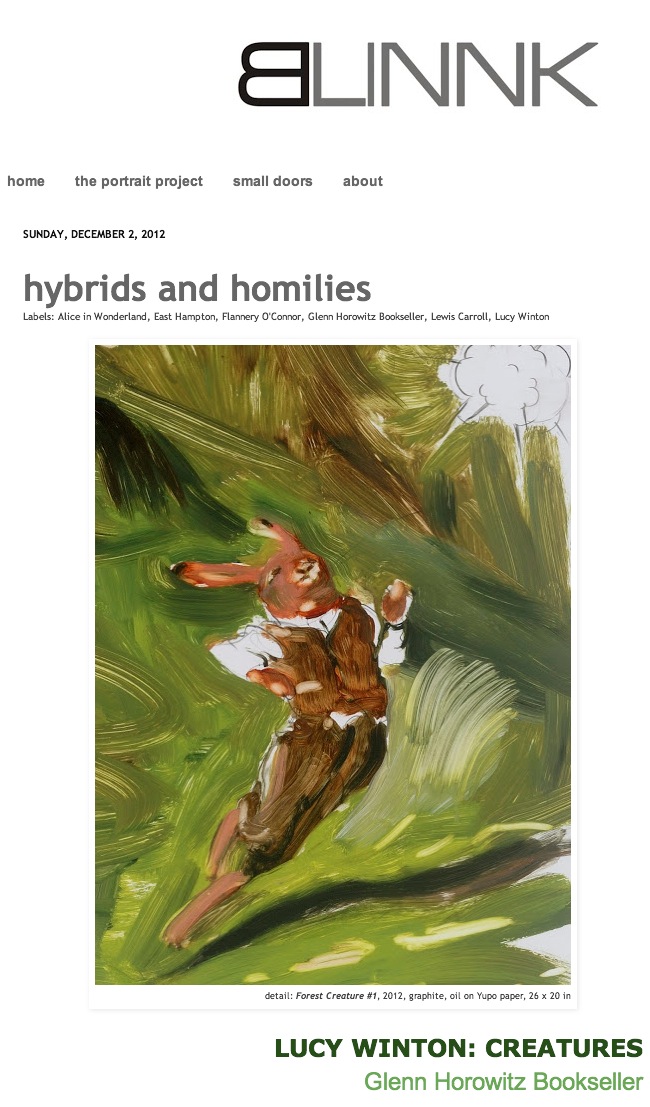 It’s not often that I’m taken by surprise. It’s not that I can’t be impressed — lots of things impress me. But true surprise is different. Picasso’s Mosqueteros at Gagosian, 2009 — that surprised me. New Zealand’s Marmite shortage — big surprise. An art fair in Atlantic City…um, somewhere between surprise and fatigue. Not that surprise in and of itself is key to art making — not by a long shot. But after a long time of looking and thinking about art, being truly surprised is a little like falling in love.

Now on view at Glenn Horowitz, Lucy Winton: Creatures, a small group of paintings on paper that are seductive, sentimental, cheeky and fresh. This is the real thing — a must see. Lucy Winton seems to do most of her thinking at the cusp of imagination, commingling the romance of animal consciousness with her own psyche, and there she pulls out quite a plum. Diving into the rabbit hole without a hint of irony, Winton dabbles in the unheimlich (Ger., uncanny) and in social taboos, absurdism and territories unknown from the past, future and present tenses.

Her paintings are intimate and luxurious, moody and gothic, and they bring to mind the likes of Poe, Lewis Carroll and Flannery O’Connor. For the artist, whose influences run the gamut from children’s literature to Edwin Landseer and Jorg Immendorf, there is a special power in the creatures, places and things that populate her world, a parallel universe of visual non sequiturs filled with rich metaphors and a sweeping and poetic mindfulness.

In After War, Snow, the artist snuggles with doe-eyed cattle that lounge among her fleshy brushwork and velvet fields of gray. Little mountains of snow fall on this softness like errant globs from another world, laying across the composition with little regard for reality. Her paint application here is subdued, evoking the Spartan curves and naturalism of Georgia O’Keefe. And then — without warning — Winton fiercely effects a sort of painterly dismount in which she suddenly channels the hand of Frans Hals or John Singer Sargent and their swashbuckling strokes of pigment. She swirls over broad expanses, canoodling with her brushes among fleeing rabbits and bursting star shapes, tree trunks and stairways. Gliding her brush across swaths of Yupo paper, Winton advances into breathtaking passages of pure paint. Her brushwork is frisky and deliciously wicked, as if there’s alchemy in each stroke. If you know the feel of a paint-saturated brush, you’re right there with her — skating across the icy translucence of this waxy white geography.

Recently, Lucy Winton and I exchanged a few thoughts on content, context and the chimerical in her paintings:

Are there specific references to the snow in your work?

My snow is definitely a reference to Jorg Immendorf’s Cafe Deutschland, The Wizard of Oz snowfall scene, and the calming — even opiate — feeling I get from that. I also grew up in very snowy Minnesota.

There seem to be elements of Shamanism in your work, and a sort of luxurious communion with animal spirits.

I fantasize about communing with unreachable mammals…so when I paint me sneaking up on a deer or lion, I really get pleasure. That pleasure is spiritual.”

Lurking within these dramas, it also seems there are the things of social taboos, repressed memory, dreams and the uncanny, or unheimlich, experiences, whether actual or intuited. In Freud’s 1919 landmark essay, The Uncanny, he talks about the uncanny experience as:

“…that class of the frightening which leads back to something long known to us, once very familiar.”

Winton’s examination of the unheimlich is far less dark than Freud’s, but the idea of a parallel universe where the unfamiliar is familiar again, is an irresistible connection. But, I digress. Winton’s images and the animal consciousness they evoke are spectacularly weird and wonderful. At the same time, they seem to come from our shared childhoods or deep inside some collective unconscious.

I lived in India for about six months a long time ago. I have definitely referenced one Brahman cow eye about 6 times — same darn eye over and over.

Your works seem to have a floating narrative that is familiar but fleeting. Are you inspired by specific works of literature?

Mostly I am inspired by children’s book illustrations — sometimes regardless of the narrative. One weird personality marker I have is that I am inappropriately religious, indecisively so…and from an atheist, humanist background. That can leak out in my work.

The idea that (on top of everything else) part of Lucy Winton’s visual psychology is driven by wanton religiosity — makes me like the work even more.

“The compulsion to erode boundaries between herself and
other creatures is one of Winton’s great creative strengths.”