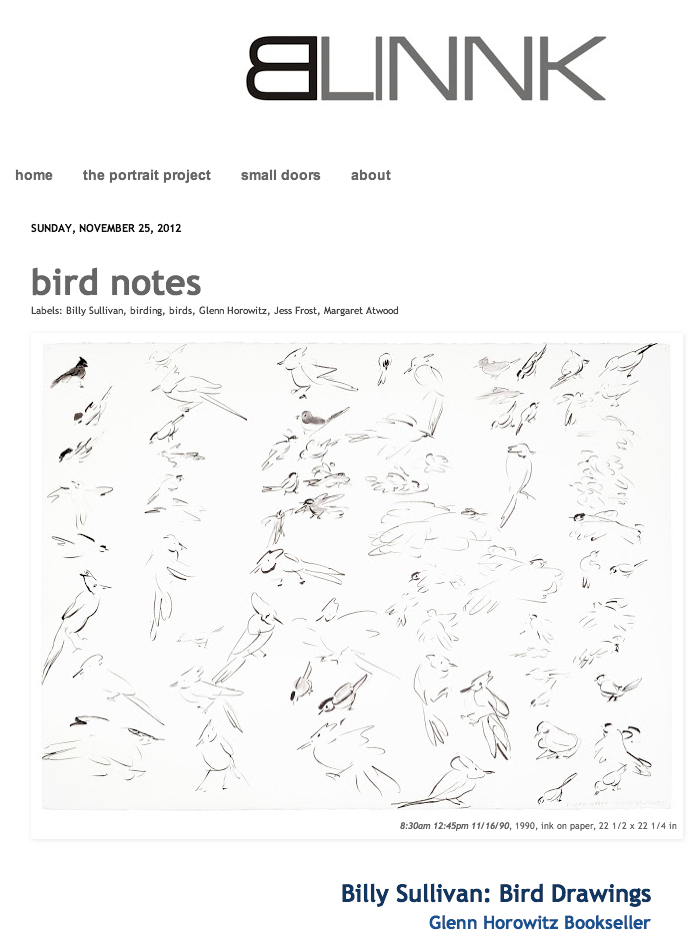 Since the early 1990s, artist Billy Sullivan has been drawing the birds that frequent his East Hampton backyard. Currently on view at Glenn Horowitz Bookseller, also in East Hampton, are selected drawings from over three decades of Sullivan’s nuanced line, keen observation and his quick and fluent hand.

Sullivan’s mellifluous lines and inky swashes of brush reveal more than the empirical — they are meditations on being and birdness, flight and stasis and persona, disposition and anima.

His imagery moves across the page quickly, multiplying with all the briskness of flocks of birds in flight. The drawings are fleeting and minimal, and yet their conveyance of the nature of all things bird is really quite astonishing.

Gallery director Jess Frost sat down with me last week to share some thoughts on the exhibit, which features works dating from 1990 to three drawings completed the weekend before the show opened.

“Some of them are like field drawings,” Frost continued, “they’re all done from life. Billy sits at his dining room table in front of a picture window. All the works are titled by date and time, so you can tell that certain birds arrive seasonally.”

This body of work, you might say, is in direct opposition to Sullivan’s acclaimed figurative paintings, which are drawn from his own photography and photographic archives. The paintings are diaristic, crisp and sexy, transforming the humble snapshot into poetic characterizations that depict the life and times of Sullivan, his famed cadre and the people and things in his orbit.

In his photography, a renown body of work in its own right, Sullivan has chronicled some 45 years of art world shenanigans that he experienced firsthand, beginning with those halcyon days at Max’s Kansas City beginning in the late 1960s. Lauded for the incisive photographic installation he mounted in Day for Night: The 2006 Whitney Biennial, Sullivan’s body of photographic works bounce from sun drenched beach parties to matter-of-fact nudes and the clubs, cocktails and camp of the 1970s and 80s.

Like the bird drawings, the imagery contained within his portraits and still lifes reveals as much about the artist as it does his subjects. Sullivan’s hand is smart and honest, without a touch of cynicism. An inventive and buoyant colorist, the bird drawings — devoid of color — reveal that gentle bullfighter within the artist.

Accompanying the exhibition a limited edition book, BIRDS, with text by author, birder and conservationist, the famed Margaret Atwood and Sullivan’s drawings. BIRDS is available for purchase through Glenn Horowitz Bookseller

On the evolution of both the exhibit and the book, Frost recalled her delight when the famed author agreed to include her 2010 essay on bird conservation, originally published in The Guardian, in the book.