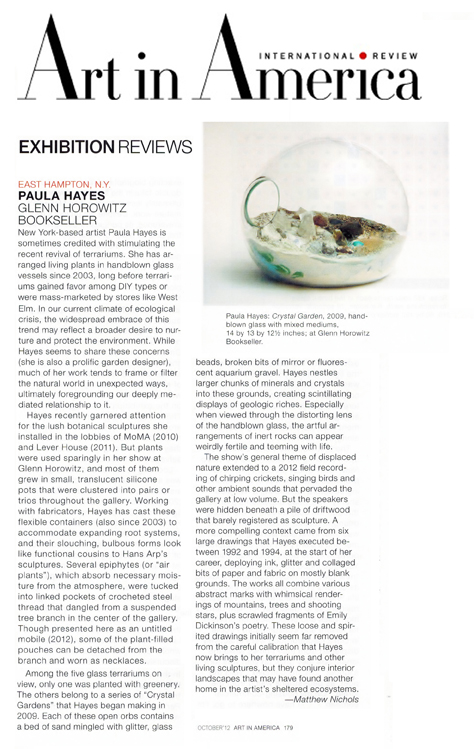 New York-based artist Paula Hayes is sometimes credited with stimulating the recent revival of terrariums. She has arranged living plants in handblown glass vessels since 2003, long before terrariums gained favor among DIY types or were mass-marketed by stores like West Elm. In our current climate of ecological crisis, the widespread embrace of this trend may reflect a broader desire to nurture and protect the environment. While Hayes seems to share these concerns (she is also a prolific garden designer), much of her work tends to frame or filter the natural world in unexpected ways, ultimately foregrounding our deeply mediated relationship to it.

Hayes recently garnered attention for the lush botanical sculptures she installed in the lobbies of MoMA (2010) and Lever House (2011). But plants were used sparingly in her show at Glenn Horowitz, and most of them grew in small, translucent silicone pots that were clustered into pairs or trios throughout the gallery. Working with fabricators, Hayes has cast these flexible containers (also since 2003) to accommodate expanding root systems, and their slouching, bulbous forms look like functional cousins to Hans Arp’s sculptures. Several epiphytes (or “air plants”), which absorb necessary moisture from the atmosphere, were tucked into linked pockets of crocheted steel thread that dangled from a suspended tree branch in the center of the gallery. Though presented here as an untitled mobile (2012), some of the plant-filled pouches can be detached from the branch and worn as necklaces.

Among the five glass terrariums on view, only one was planted with greenery. The others belong to a series of “Crystal Gardens” that Hayes began making in 2009. Each of these open orbs contains a bed of sand mingled with glitter, glass beads, broken bits of mirror or fluorescent aquarium gravel. Hayes nestles larger chunks of minerals and crystals into these grounds, creating scintillating displays of geologic riches. Especially when viewed through the distorting lens of the handblown glass, the artful arrangements of inert rocks can appear weirdly fertile and teeming with life.

The show’s general theme of displaced nature extended to a 2012 field recording of chirping crickets, singing birds and other ambient sounds that pervaded the gallery at low volume. But the speakers were hidden beneath a pile of driftwood that barely registered as sculpture. A more compelling context came from six large drawings that Hayes executed between 1992 and 1994, at the start of her career, deploying ink, glitter and collaged bits of paper and fabric on mostly blank grounds. The works all combine various abstract marks with whimsical renderings of mountains, trees and shooting stars, plus scrawled fragments of Emily Dickinson’s poetry. These loose and spirited drawings initially seem far removed from the careful calibration that Hayes now brings to her terrariums and other living sculptures, but they conjure interior landscapes that may have found another home in the artist’s sheltered ecosystems.