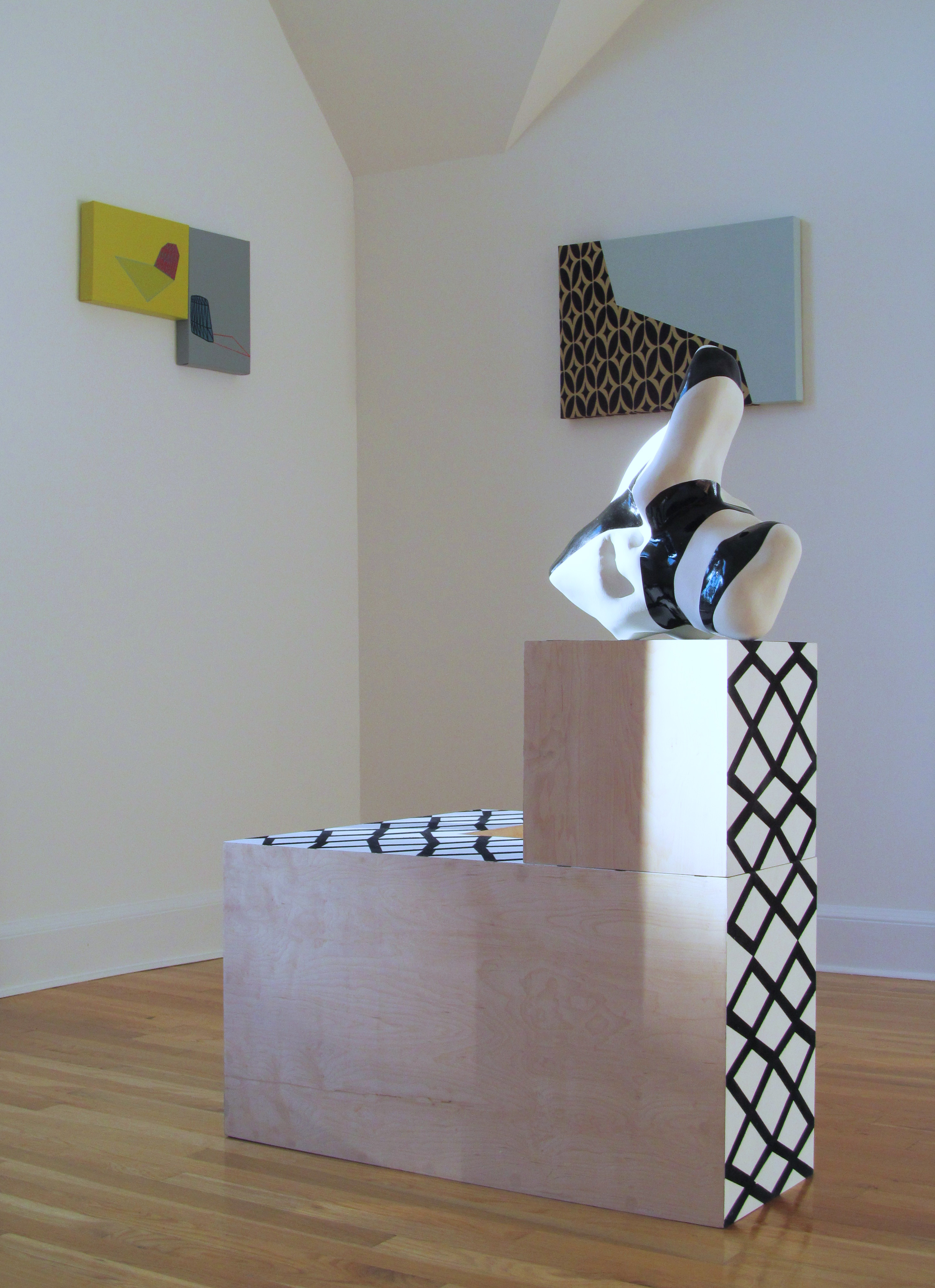 Interruptions Repeated, Almond Zigmund’s sculptural installation at the Sag Harbor Whaling and Historical Museum is a space-warping, grid-bending architectural intervention that has been plunged into the museum’s ground floor like a rogue wave. Part of the Parrish Art Museum’s excellent summer program, “The Parrish Road Show”, brainchild of Andrea Grover, Curator of Special Projects there, here in Sag Harbor Zigmund’s two soaring structures are thrust into the delicate architecture of the museum’s 19th century parlor room. Like fraternal twins, the shapes are closely matched yet separate and distinct. One is solid and the other is void – one is up and the other is down. The see-through sculpture is a lacy, L-shaped form that evokes a combination of Islamic design, highway sound baffles, and mid-century patio furniture. Made from thin sheets of die cut plywood, the structure seems to lean back in elegant repose, as if reclined in a comfortable chair. Its hulking sister, “the solid”, is cantilevered above, upended in a precarious and somewhat menacing counterstance. The physical space they occupy is mobilized both by their formal relationship to one another and by a visual kinesis that bounces the eye between the sculptures, the space between them, and the elaborate cornices, Corinthian columns and geometric ceiling treatment in the parlor.

Zigmund, whose works range from tabletop sculpture and paintings on paper to shape-shifting installations such as this one, has a knack for improvisation. Key to her oeuvre is the structural dynamism she affects in two and three dimensions which, at its best, is performative. It’s as if time moves within these installations at a pace that is both fast and slow. A tumult of memory, parallax, and precision, “Interruptions Repeated” unfolds into associations to domestic interiors and the sort of vast industrial landscape that stretches out across interstate highways, suburbia, and the modern urban environment.

A concurrent exhibition of smaller works, Interruptions Repeated (again and again), on view at Glenn Horowitz Bookseller in East Hampton examines a kindred patois, in this case, on a more intimate scale. The works are punchy and fanciful, stacked on shiny cubes with surfaces that bounce between zippy tessellations to smooth wood veneer. Doing double-time as plinths or pedestals, the cubes appear different from every angle, inviting perspectival twists that elicit a sort of sensory whiplash. The sculptures are oddly utopian, with crisp, buoyant imagery that is fixed, yet fleeting.

In B/W, a bulging form wriggles from the inside out like a small riot trapped inside a plastic girdle. The sense of animation here is palpable. Zigmund employs the most primal methodology – stacking – in Stacked Blocks, in which white rectangles are crisscrossed atop one another in a precise, architectonic mound. Assembled on a flaming red cube, they could reference an apartment complex in downtown Beijing or a post-modern island cairn.

In selected small paintings on view, Zigmund translates aspects of her three-dimensional imagery into fast moving tableaus that fly over the page the way hi-beams dart across a darkened living room. Like a clip from a stop-action film, time seems frozen in these vignettes, conjuring links to memory and transition, sunrise and shadows, passage and pageantry, as if larger fictions loom mightily just outside the margins.