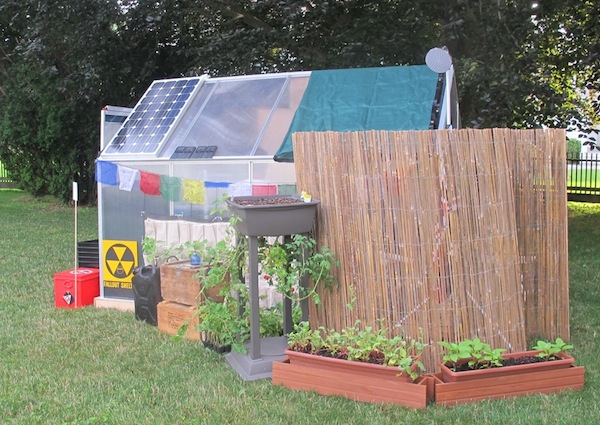 As fairgoers were dropping their cars with the valet in front of the tent at artMRKT Hamptons, picking up vodka cocktails from men in silver face-masks, and heading inside to scope out the artworks while a couple of musicians performed live atop a red scissor-lift, a few hundred feet away, artist Adam Stennett was quietly arranging his canvases in a much smaller structure.

Stennett was part of the art fair as well, which was being held at the Bridgehampton Historical Society, but his work, “Artist Survival Shack: 96 Hour Test Run” (2013), presented by Glenn Horowitz Bookseller, was a feat of endurance that was not as easy to acquire as a photograph of a beach scene.

There was very little art fair buzz in his shed, and the only culinary treats were those that he had brought in for himself for his stint in the shack. The four-day endurance performance is preparation for month-long stay in the shack that he will perform in August, which will be followed by a show at Glenn Horowitz in September.

Here is a glimpse of Stennett in his shack, with his dried poppies (subjects for painting, of course), worming handbook, and small herb garden. And if you want something to take away from the exhibition, drop in at Glenn Horowitz’s booth, where you can pick up a tin of sardines or a bottle of water — mementos from Stennet’s stay — for $100 a pop.