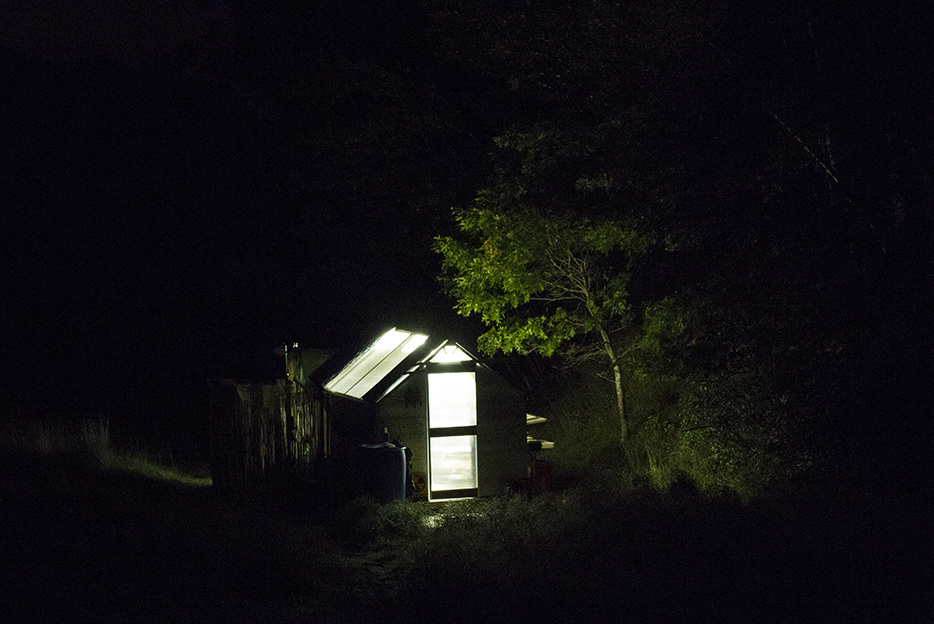 Dan's Papers, This is the Hamptons, September, 2013

There are artist studios, and there are artist studios. Simply put, the places where artists work come in all kinds of shapes and sizes. Lots of books have been written about the subject, and there are likely more to come. What’s fascinating are the diverse purposes that studios serve. For example, several decades ago studios in New York provided multiple intentions where artists created art, exhibited art and sold art all in the same place. Studio complexes, like The Beehive, which this critic visited in Paris, served as a community setting for artists to live, make art and share ideas. Buildings reserved just for studios pepper this country and include such well-known structures as the one on Lincoln Road in Miami.

Yet, there are individual studios that are not merely places to create art but exist to make particular statements as well. The current exhibit at East Hampton’s Glenn Horowitz Bookseller, an installation by Adam Stennett, is one good example. Called “Survival Evasion and Escape (The Artist’s Studio),” the real-life studio appears to be a survival shack where the artist produced works that are hanging on the gallery walls. The shack is small, containing essentials like an army cot, typewriter, a small table and survival manuals. Outside the hut, there are a teapot and kettle, candles and a clump of plants in pots, perhaps reminding us that the shack originally stood in a field near the Bridge Golf Course.

Our first thought is, what motivates this artist to build and then live in such a structure? (Stennett stayed in his shack for a month in the fields.) The fact that he was born in Alaska (in 1972) and grew up in Oregon may help explain his connection to the environment. (He now resides in Brooklyn.) He’s too young to have grown up during the 1950s, when fallout shelters on the streets were built to protect us from nuclear attacks by the Soviet Union.

Yet the question remains: what direct experience did Stennett have with the idea of survival? Did he come in contact with people who even today have survival spaces in the basement? Does he know anyone who belongs to a Neo-Nazi group who lives in survival bunkers? We don’t mean to be flip with our questions. We just wish we knew more about the artist’s background and motivations. While his living for a month in the shack is labeled a “performance,” perhaps we don’t need to know why he selected to do what he did. Yet, we still wish we did.

The works that Stennett created when he was living in the shack, using black paper and paint, are realistic, yet eerie, evoking a bleak and dangerous mood. Which is reasonable, considering that the paintings feature the Civil Defense symbol, a Nuclear Attack Survival booklet, posters/manuals with names like “Civil Disturbances and Disasters” and a Field Guide to the Psilocybin Mushroom.

Another display on the wall shows a potato gun which, when shot, explodes into the air. Real Idaho potatoes are lying on the floor beneath the display. Are the potatoes ammunition for the gun or do they represent food for survival? Such items not only have contradictory meanings but also evoke conceptual art.

The shack itself has many interpretations, perhaps too many. Yet, that’s what conceptual art is all about. We are left with one meaning, however, that resonates with relevance: the unpredictable economic times and threat of war in the Middle East make us think about survival whether we like it or not.