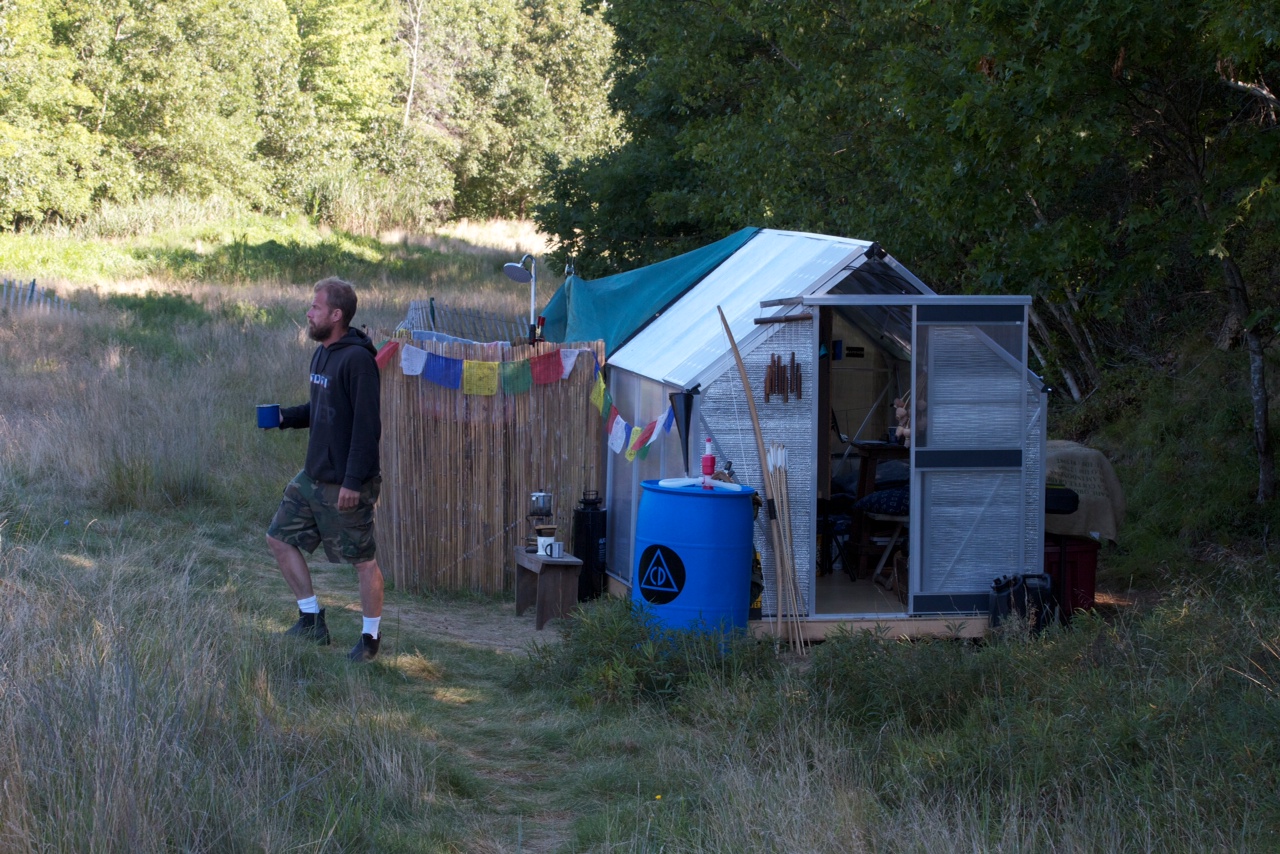 Inside the Survival Shack
By Jennifer Landes

There is something spectral about the abandoned structure parked in the middle of Glenn Horowitz Bookseller in East Hampton. Once erected in the woods in the no-man’s-land between Noyac and Bridgehampton, it was the temporary home of Adam Stennett in a self-created artist’s residency executed commando-style. Now, it is the centerpiece of an exhibition devoted to the work he produced there and the time he spent there called “Survival, Evasion and Escape (The Artist’s Studio).”

Solar-powered and self-composting, with worms that still feed on his waste products today, the structure gave him a place to devote himself entirely to his artwork where he could afford the rent and utilities and which freed him from taking another job to support himself. Of course, the day-to-day of survivalist living leads to its own tasks and chores, but certainly nothing as banal as a typical 9-to-5 day.

Packed with equipment, supplies, art, and art-making materials, the 6 1/2-by-9 1/2-foot portable greenhouse structure was organized with maximum efficiency for off-the-grid living and an artist’s eye for self-referential installation. On any given day, one could visit the shack and find the bed neatly made, the garden well tended, the easel and paints ever at the ready, and a number of battery packs feeding off the solar panel. On the precisely made bed, a potato gun with ammunition was laid out along with a gas mask, a Japanese bow, and a convex mirror capable of using sunlight to ignite everything in its path.

The shack and its contents had a certain “everything I’ve ever made” quality about them and neatly set out themes and ideas the artist has been exploring for much of his career. Always fascinated by what could be procured just by trawling the Web, he made the potato gun himself years ago after finding the directions for it in a search result. The Everclear grain alcohol he has featured in paintings can be used in extracting an LSD-type essence from morning glory seeds.

Ted Kaczynski, the Unabomber, who has been alluded to in other works and series by the artist, is present here in the typewriter Mr. Stennett has chosen to place at his desk, the same model Mr. Kaczynski used to type his notes and that was found by investigators in his own woodside cabin.

There was more and more, everywhere you looked, references accreting until everything seemed to circle back on itself, destroying any linear relationship among intention, creation, and meaning.

The way Mr. Stennett previously painted objects related to self-created legal drug highs led him to paint portraits of the objects he included in his shack. A visitor to the shack may have seen a work in progress. On the easel one day was a portrait of sorts of a Civil Defense manual on handling blackouts (presumably the electrical kind), but the double entendre was stressed with the inclusion of a flask. The objects had been photographed and Mr. Stennett was painting them from the two-dimensional image in acrylic on paper. The original manual and flask could also be found in the shack.
On the wall at Glenn Horowitz is a collection of such works, portraits of his toilet, the gas mask, an Army surplus water can, and then more survival objects from the Web, vintage fallout fruitcake and canned water, and more.

This trebling of ideas from real objects to depictions of them once and then twice removed contributes a jumpy, obsessive feeling to the place. On site, Mr. Stennett’s overcaffeinated hyper-articulateness about the project and his aims for it added a real feeling of authenticity to the performance. It felt as if he were spending time in the head of someone who might actually be truly paranoid and radically disengaged from society.

His absence, the survivalist cut loose from his self-made haven, makes the structure seem lacking in its essentialism. Video showing him shooting the potato gun and an LP playing on a vintage record player, with needle popping and a warm, calm voice advising the best way to prepare “if the bomb falls,” provide a human presence, but the gallery can’t help seeming sterile, as if one were viewing it in a laboratory setting, the pristine vitrines only adding to the feeling. It is to the shack’s credit that it can adopt new environments and adapt to them, taking on new meanings depending on the site.

Once again through the assistance of the Internet, Mr. Stennett amassed a collection of golf balls emblazoned with insignias and trademarks of the private and public organizations that have caused most of the paranoia, both legitimate and imagined, over the past century. These include the F.B.I., C.I.A., and N.S.A., to name a few government entities known to lurk in the consciousness of every conspiracy theorist, but also Exxon, Siemens, Halliburton, and others.

Golf and racing are new to the artist’s themes and directly related to the Bridgehampton site he stayed on. It inspired stenciled flags with the word “utopia” printed on them as well as the golf ball collections, including one with a racing motif featuring automobile manufacturing companies and attendant concerns such as Champion spark plugs and Chevron gasoline.

You have to admire the way the guy thinks, finding connections between this work and place and his prior creations vertically, horizontally, and diagonally. It is tempting to take apart each work and examine its various references and meanings, but viewers can perform that task more efficiently on their own. One just needs to get started.

Sometimes it feels as if all the other themes are just an elaborate ruse to distract everyone from arriving at the fact that Mr. Stennett just loves to paint and is great at it. But even if that were true, what a great way to get there.

The show will be on view through Oct 28. The artist will be in residence in the gallery over the Columbus Day weekend, once again living and working in the shack for a 48-hour period.