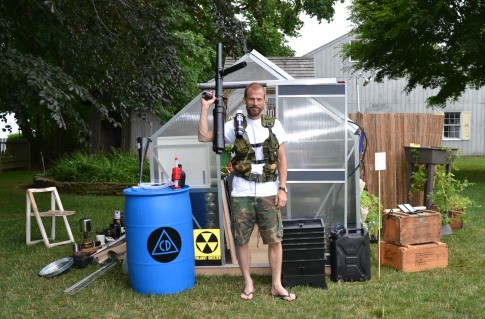 Inside the large white tents of the art fairs, glamour, decadence and fine art are on high display. But outside of artMRKT Hamptons—squatting along some of the most expensive real estate in the country—a group of installations focus instead on the underbelly of our consumerist society. Collectively, the works explore the question of how artists manage to create and survive the shark-infested waters of the high-stakes art market.

In one form or another, all artists are concerned with survival. Not only having enough money to pay their bills and put food on the table, but with the survival of their own free spirits and their ability to create timeless work. Time is the ultimate luxury, commodity, and necessity for an artist: time to work, to think, to talk, to paint and to create.

Adam Stennett has found a unique way to give himself the gift of time. In Artist Survival Shack: 96 Hour Test Run, Stennet has set up his 6.5 x 9.5 foot off-the-grid artist survival shack on the grassy banks near artMKRT Hamptons’s Main Street entrance. For the duration of the fair, Stennett installation/performance serves as a test run for an upcoming month-long stay in August (apparently on the estate of a wealthy collector).

Made out of aluminum and polycarbonate, Stennett’s greenhouse skeleton includes everything an artist needs for survival “So,” he said, “I can make my art.” Stennett went on to explain that after coming to New York as a young man and working in a series of jobs, he no longer had time to paint. He began to wonder what was essential to his survival and decided to create an environment that reflected his distillation process.

In his installation, Stennett has a cot, a 55-gallon rainwater collection system, a portable toilet, solar recharable AA and AAA batteries, a pocket radio, a solar stove for cooking oatmeal, and couscous, and a grow wall that includes basil, tomatoes and spinach. Along the way, Stennett said he began to accumulate items that were essential to his spiritual survival: an easel; paints; a vintage typewriter; a Japanese bow and arrows to practice meditative Zen archery; a Tibetan Buddhist prayer flag; wind chimes; and a potato gun he made from PVC pie which uses a barbeque ignition and Aquanet hairspray to ignite.

Visiting Stennett in the midst of the art fair extravaganza is a refreshing relief from the high-octane deal-making going on inside the tents. He’s alone in his shed painting images of some of the bric-a-brac that make up his world. One image caught my eye, an acrylic painting of (and titled) A Field Guide to Psilocybin Mushrooms done on his small and retro artist’s easel. In fact, his shed is full of strange books and rows of vials that once contained substances like Ephedrine, which Stennett says artists have used over the years in order to create.

At times, I felt Stennett’s statements endearingly naïve—that Japanese Zen bow—until I remembered some of the extremes the artists I knew growing up took, even after great success, to stay in touch with their creative edge. I thought of Mark Rothko who, though he was a wealthy man, preferred to live like a poor man in his studio at the end of his life—close to his art.

Stennett says we all have to choose what to sacrifice and what to hang onto in this life. If you wanted to see one man’s choices, visit Stennett in his Artist Survival Shack.