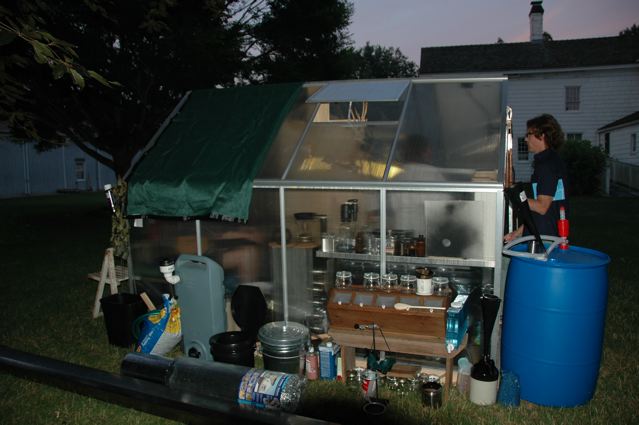 Double the Fairs; Double the Fun: ArtHamptons and artMRKT Open to Capacity Crowds on Thursday
By Jennifer Landes

ArtHamptons and artMRKT opened on Thursday night to crowds happy to take in the art in the various gallery booths and other related performances and activities. Those walking into ArtHamptons at Nova’s Ark in Bridgehampton were greeted by Larry Rivers’s leg sculpture. Those entering artMRKT at the Bridgehampton Historical Society from Main Street could witness Adam Stennett executing a trial run of a survivalist performance piece he will do at an undisclosed location in August. Mr. Stennett was already collecting water and had his outdoor shower set up; a cot and an easel where he worked on a new painting. Having slept for only two hours the night before after spending a good portion of it setting up, he was a bit tired but happy to answer questions and point out the things he had on site to get him through the weekend. Adam Stennett had everything he needed for a 96-hour run through of his “Artist Survival Shack” project, where he will live as a survivalist at an undisclosed South Fork location beginning in August.