Walter Steding. King of the Poppies; Paintings and Drawings. 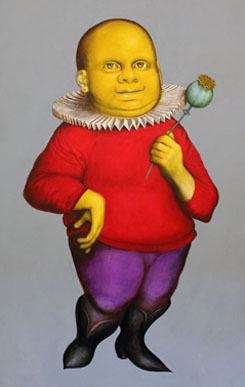 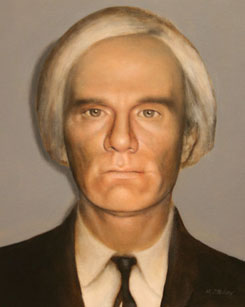 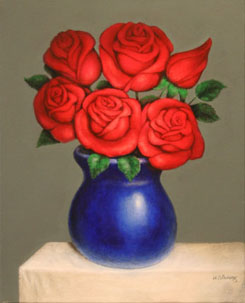 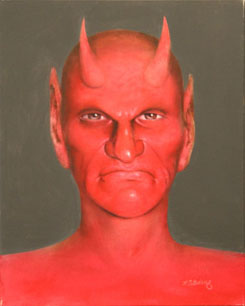 John McWhinnie at Glenn Horowitz Bookseller is very pleased to announce their new exhibition, Walter Steding. King of the Poppies; Paintings and Drawings. The show will open with a reception for the artist on Thursday, July 17th from 6 to 8 pm, and will run through August 14th.

There is an undeniable Pop sensibility at work in Stedings’ compositions. His still life works have the hallmarks of kitsch about them, as does his election of devils, imps, dogs and children as subjects. Yet the motivation to present something pure, something essential, undercuts the usual tiresome irony one associates with Pop and kitsch imagery. In a Post Modern context kitsch typically presents the well-known, sentimentalized subject in a straightforward manner allowing one to by-pass the actual image and reference cultural conventions and attitudes surrounding it. While insisting on its simplicity contemporary kitsch actually points to larger, more complex themes in culture and aesthetics. Steding uses this extra dimension to address something metaphysical in his subjects.

Early in his career during the legendary days of pre-eighties New York, Steding had the distinction of attracting the attention of Andy Warhol who, appreciative of his abilities, subsequently employed him as a painting assistant. Warhol took an interest in Steding’s other creative outlet, as musician, and eventually took on the role of managing his musical career, a project Warhol had not engaged with since working with the Velvet Underground in their seminal years. Steding’s musical performances at that time were as a regular opening act at CBGBs for other emerging bands of the era including Blondie, the Ramones, and Suicide. With his band, Walter Steding and the Dragon People, he is featured in the cult slice of time film Downtown 81, which includes performances by Jean Michel Basquiat, Kid Creole and the Coconuts, Debbie Harry, Chris Stein, Arto Lindsay, Ronnie Cutrone, Cookie Mueller, Victor Bockris and a host of other art and musical scenesters of the day. Steding plays the violin, a classical instrument, teasing from it traditional sounds with an unusual feel.

This sense of the traditional with a twist is also most apparent in his painted work. Steding’s subject is portraiture and still life, two currently unfashionable themes in today’s art world. His representative style and classical technique are imbued however with a very particular character and sensibility. While taking pains to depict his subjects realistically, he is concerned primarily with presenting the unseen world, or the world of “non-being”. Perhaps this is why many of his portrait subjects are transformed into more abstract versions of themselves which appear, also, to acquire some of the artist’s own physiognomy. The instance of portraiture is fused into these images and faces. Features exhibit an intensity of focus that somehow lifts away from the subject, hovering before the sitter like a projected mask, just a part of the person’s aura of identity. Something essential and ineffable is invoked. This is confusing when we are presented with somewhat simplified facial compositions and this is why the works cannot accurately be called caricatures. None of his subjects occupy real space. They appear in a purely pictorial space, looming from a flat, neutral background, happy to exist in an unreal picture convention even as they fix you with a cool look that dares you to deny their presence. Even his dog subjects are not completely demure as, becalmed, eyes forward, they draw in the viewer’s gaze.

While there is a sense that even the most sober of sitters in Steding’s work is sporting phantom horns, it is impossible to overlook the many paintings of actual horned personages, demons and sprites who populate his canvasses. Whereas the unseen is powerfully evoked in his depictions of real people – personalities of the arts, business and domestic realms – in these other works the fantasy realm, the “non-being” is given a realistic form and projected at the viewer as directly as any celebrated artist, writer or cherished family pet.

Walter Steding was born in Harmony, Pennsylvania. As a violinist he first worked with The Electric Symphony and developed his own electronic instruments including a synthesizer triggered by biofeedback devices. He performed as a soloist at art galleries and eventually at New York clubs such as CBGBs and Max’s Kansas City. He has worked as a recording artist and performer with among others Blondie, Jim Carroll, David Byrne, Chic, Robert Fripp and Panther Burns. On television he was orchestra leader on “Glenn O’Brien’s T.V. Party”. He has written, directed, scored and acted in films and plays including Not Quite Love, Time Capsules, Polyester, Union City, and Downtown 81. He lives and works in New York City.