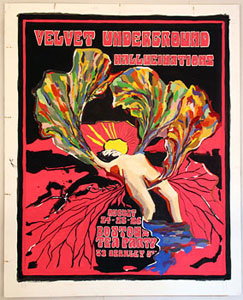 John McWhinnie / Glenn Horowitz Bookseller is pleased to announce an exhibition commemorating the 40th anniversary of the release of The Velvet Underground and Nico. The album, perhaps the most famous debut by any band in the history of rock and roll, continues to resonate today with collectors, indie-rockers, aficionados, critics and the culture at large. Its enormous presence, however, has yet to be fully examined in an exhibition. This show attempts to correct that oversight, offering the most comprehensive collection of Velvet Underground memorabilia and artifacts to be seen in New York City.

The exhibition tells the story of the album and the Velvet Underground through the historical artifacts of the period. Drawn from public and private collections, it includes rare printed work – posters, books, silk-screens, ads, reviews, and ephemera – as well as albums and photographs. The exhibit reveals the many styles of cultural promotion and engagement that served the Velvets, from their first gigs in New Jersey as a fledgling band to their celebrated collaboration with Andy Warhol. It charts the evolution from garage band to proto-punk, a movement that began with the release of their seminal first album. Rare posters in the show, including a signed poster from the 1966 performance in Provincetown, show how much Warhol influenced their early look. Later graphics show the band grappling with their identity, fusing a detached east coast cool with a slight nod to the psychedelia of the period. The show also reveals how their identities wandered over the latter part of the decade. Broadsides and announcements by other graphic designers, trippy to the point of high hippie, reveal how little control over their image they ultimately had. The look, a fascinating hybrid of art, design and musical cool, will be on display at the gallery.

Never before published or publicly shown photographs of the band by Adam Ritchie, Paul Morrisey and Doug Yule will be exhibited. The accompanying catalogue, C/O The Velvet Underground New York N.Y., features texts by Richard Prince, William Gibson, Jack Womack, Jonathan Richman, Jon Savage, John McWhinnie and Johan Kugelberg. There will be both a limited and deluxe version of the catalogue, each containing original photographs and silkscreen posters.

Highlights of the exhibition: