Tauba Auerbach A Book is Not An X 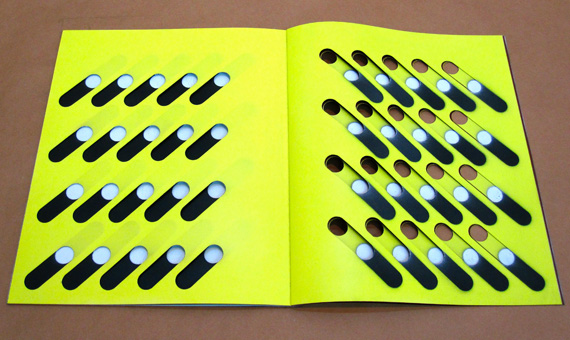 John McWhinnie and Glenn Horowitz are pleased to present an exhibition of new work by Tauba Auerbach at their East Hampton bookshop and gallery. The exhibition, entitled A Book is Not An X, has been curated by Jeremy Sanders. It opens Friday August 12th with a reception from 6-8 pm and runs through September 20th.

Tauba Auerbach is a polymath and her work spans a wide variety of both traditional and non-traditional media, encompassing everything from paintings and photographs, to prints, films, and musical instruments. Since the very beginning of her artistic career she has been devoted to the creation of inventive artists’ books. Whatever the medium, Auerbach is drawn to patterns, orders, and systems and her work frequently explores language, typography, mathematics, and other such tools for communicating or recording information. Her methodology resembles that of scientific inquiry and the works themselves are often like thought experiments. What makes the work so compelling is the extraordinary formal clarity with which she renders ideas into images and objects.

In a 2010 Artforum review of German artist Carsten Nicolai’s book, Grid Index, Auerbach wrote that, “a book is an X-axis. The format is almost always linear; the content, bound in a prescribed order, marches single file.” The title of the exhibition riffs on the first line of her review and hints that Auerbach’s impetus to create this body of work was a desire to assert a far more open-ended conception of a book. The notion of an axis remains in play, but is variously collapsed, rotated, or fractured.

Auerbach has created nine new works, each made in an edition of ten or fewer copies. The creation of these books, and indeed all of Auerbach’s recent work, has been driven by her interest in topology. Topology is a branch of mathematics that inquires into the basic characteristics of surfaces and objects in order to understand the range of incarnations the form can take while still retaining its defining properties. Thus, each of these books is an experimental object, and a radical reconsideration of what a book may be. Each was conceived in order to uncover possibilities within the book form and as a way of seeing how form, once reinterpreted, could be used to contain or convey content. Several of the books rely on tomography (the practice of using cross-sections to visualize the internal structure of an object or volume) to transmit information, others reimagine the binding and other structural elements of a book so that they become central to its meaning, still others further develop ideas that Auerbach first began to explore in creating a much anticipated series of pop-up books for Printed Matter. Altogether the exhibition demonstrates categorically that a book need not be merely “an X.”

Tauba Auerbach lives and works in New York City. She is represented by Paula Cooper Gallery. Her first one-person museum exhibition opens this November at the Bergen Kunsthall in Norway.