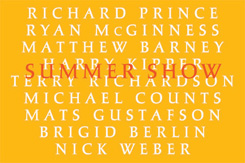 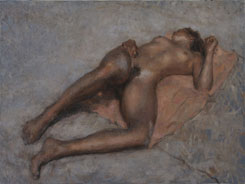 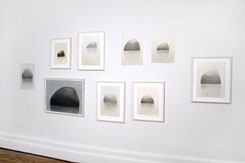 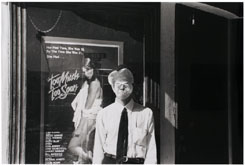 Showcasing a diverse range of artists this exhibition spans works from the tail end of the sixties through to those produced just this year, and encompasses painting, drawing, photography, print, collage, digital art and sculpture. Contrasts in scale range from an enlarged Harry Kipper digitally-altered portrait to the sculptural pieces of Michael Counts and his interests in the notion of the micro epic. The artist’s involvement with the book is a recurrent theme and is touched on by commentators ranging from Brigid Berlin to Matthew Barney, by way of Richard Prince and Mats Gustafson. It’s an odd crowd and the sublime rubs up against the ridiculous. The meditative serenity of Gustafson’s becalmed nature studies is answered by the apparently barbarous, yet teasingly sophisticated imagery of Richard Prince. The ever-provocative Terry Richardson, represented here by his youthful snapshots of partying punk peers in seventies L.A., faces off against the poetic, poised nude oil studies of painter Nick Weber. Ryan McGinnesses wall-flowering silkscreens present one fascination with the printing process, while Brigid Berlin’s very visceral experiments show quite another. There’s something, as they say, for everyone; or Mats Gustafson, perhaps, would call it a smorgasbord. Tasty. Featured artists include Richard Prince, Ryan McGinness, Matthew Barney, Terry Richardson, Mats Gustafson, Brigid Berlin, Nick Weber, Michael Counts, and Harry Kipper.