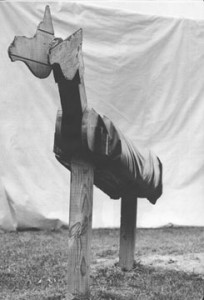 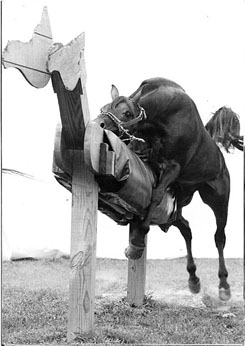 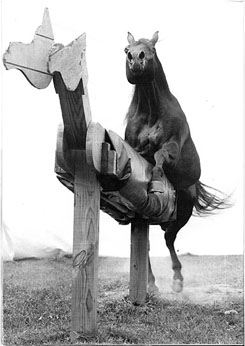 In the most literal sense the title Stag Film is what it says: a stag shot on film. Period. There is nothing implied or symbolic. The work is a documentation of a sexual act, one that is artificial (because it involves a dummy horse, a construct) and natural since it incorporates the actual emission of the horse’s sperm.

Yet implications and layers of meaning can be derived in viewing the project. Is it representational of the relationships between male and female in that a woman can use the artificial allure of cosmetics and synthetic fragrances to trap a man in to marriage and fatherhood? Or is it the nature of consumerism and commerce; how advertising through the medium of the Artificial Image lures people into spending their life-force into the empty promises of products and mechanisms to be bought and discarded? Or is it that Stag Film is simply about motion and emulsion and how light at 250th of a second captures and renders life static? Your choice.

In tandem with this exhibition JMc & GHB editions will introduce a new publication drawn from the show, Stag Film. Planned as a large quarto-size paper-covered volume, the book will be published in an edition of 2000.

Originally a painting graduate of the Rhode Island School of Design, Steven Klein moved swiftly into the photographic realm and was involved in shooting several high profile fashion campaigns. His mediums include magazine work, exhibitions, film, and most recently the video for Lady Gaga’s single “Alejandro”. His work has been exhibited at several gallery spaces, including Deitch Projects, and Gagosian Gallery. He currently lives and works in New York City.