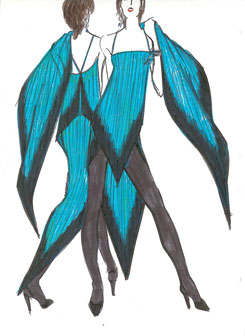 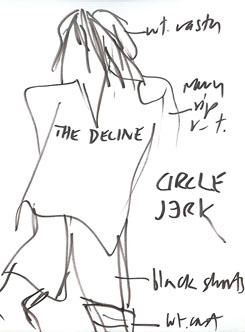 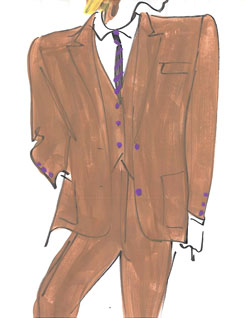 John McWhinnie at Glenn Horowitz Bookseller is pleased to present Stephen Sprouse:Drawings 1970s-1980s, an exhibition featuring 100 pieces of the artist’s original fashion drawings and inspirational related ephemera. The exhibit will open Saturday, January 10th, 2009 with a reception from 6-8pm and run through February 21st.

Drawn from an archive of more than 1500 separate pieces, including 600 original drawings, the featured work on show spans the decades of the 70’s and 80’s – the earliest works dated circa 1974/75, leading up to the late 80’s as seen in numerous pieces physically annotated in Sprouse’s hand as ‘88. Presented is a wide array of working drawings and notes executed in marker, pen, pencil and Xerox – black-and-white and color – some hand colored in gouache and watercolor. Sample fabric books and strategic worksheets in which Sprouse collaged his signature color palettes will be on view.

Alongside sketches made during his years working with Halston are later more explosive, individually styled creations. The exhibit, much like a time capsule, captures the technical process of Sprouse’s design work and the emergent visual style that became his hallmark born and developed out of a most decadent and colorful era. His strong, vigorous line is consistent throughout, whether serving to describe the poised, elegant presence of Halston models or the energized, expressive figures of Sprouse’s own design. The progression/transition is obvious. An impressive economy of line and an innate understanding of the body and fabric are clearly evident. As colorful as his clothing was – he brought day-glo to the runway – it is intriguing to note how many of his ideas are discovered in simple black-and-white linear schema. Visual tropes he employed – graffiti, tv/video scanlines, urban street motifs like spikes, bullets, chain-link – emerge as cunningly deployed pattern and speak of the artist’s creative wit. His tendency to include words and song lyrics on sketches gives insight into Sprouse’s creative process where art, fashion and music were intimately connected. Among numerous examples in this exhibit: Blondie lyrics “Shayla Worked In A Factory” floating in the space above a sketch for a dress design, and “L.A.-LA-LA-LLLANDINGG” from Patti Smith’s song Distant Fingers hovering above a finished drawing of a man wearing shades and a Sprouse jacket design. Some of the pieces indicate they were expressly designed with a particular musician in mind. He writes “Debbie” or “Anthony Look” (as in Anthony Keidis of the Red Hot Chili Peppers) atop the page. Others simply resound of the rock world with figures rendered in fierce microphoned stance. Sprouse’s use of the Xerox machine to experiment with various colors and open playful opportunities recalls Warhol and his focus on multiples. The graphic immediacy of energetic, loose-handed lettering invokes the raw, Punk aesthetic so prevalent in the upstart Xeroxed ‘zines and music bills of the period, most famously exemplified by Raymond Pettibon.

Hailed as a prodigy, Stephen worked with Bill Blass at the tender age of 14. Restless and 18, after 3 short months of college at the Rhode Island School of Design, in search of big city stimulation, he made a serious commitment to New York City. He was offered a job with Halston, then the pre-eminent US fashion designer. He lost no time in taking up with Warhol and the Factory denizens. Andy Warhol’s everything is equally important Pop aesthetic resonated with Sprouse. While he was dressing celebrities in Halston high-end clothes, his penchant was for the Punk and New Wave aesthetic emerging amongst young artists and musicians of the time. Many of the drawings in this exhibit reflect the Disco/Punk movements as the two musical genres thrived simultaneously; Studio 54 vs Max’s Kansas City and CBGB’s. Finally quitting Halston in his early 20s Sprouse moved downtown and worked as a band photographer for a while. Here he met with Deborah Harry and the members of the ground breaking group Blondie. She became an important muse. The two worked together on clothes for performances and as Blondie’s star rose, alongside the advent of the visual marketing of music, Sprouse’s personal designs reached a wider audience. This was the springboard he required to initiate his own label. At the “mature” age of 30 he emerged with a bang on the international fashion stage in his first solo show of 1983. This and his show in 1984 established his electrifying style and startling vision at the forefront of a new fashion momentum. A true artist, with little time for the business aspect of the trade, Sprouse subsequently set up a variety of fashion design and retail ventures. Despite the fact nearly all met with gasps of admiration and approval, he somehow failed to establish a lasting commercial success. In every sense a visionary innovator of the time he went on to a heady career of critical adulation and commercial inconsistency.

The uptown/downtown theme was to play a great part in Sprouse’s story as he socialized in both milieus and sought to connect the two in his clothes and in his store locations, be it Fifth Avenue or Wooster Street. The cocktail had mixed results in terms of commercial success. His “downtown”, “street” influenced designs were executed in the highest quality material making them all but unaffordable to those who sympathized most closely. His insistence on artisan quality and on hand-working pieces could not work for large-scale commercial production. As widely admired as his designs were, his career as a designer and marketer started and stalled throughout the 80s and 90s. Following a series of wildly successful collaborative projects with larger fashion houses, all too early, in 2004, Stephen Sprouse passed away due to complications from lung cancer.

Visionary; design innovator; style iconoclast, his unique impact on the “eye” of the fashion and music world has left an everlasting, burning message. In the intimate immediacy of his sketches and drawings this exhibit gives the viewer a rare opportunity to draw closer to the very heart of Stephen Sprouse, the artist.