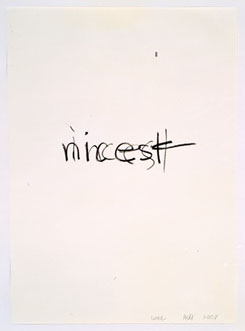 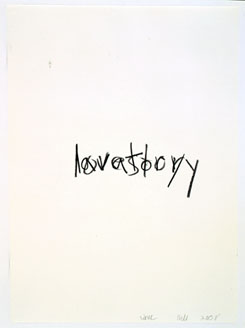 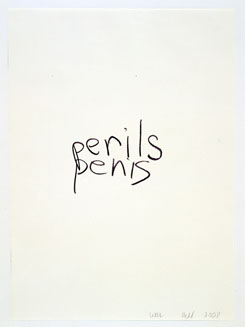 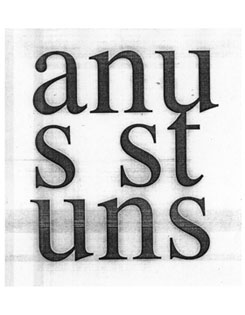 John McWhinnie at Glenn Horowitz Bookseller is very pleased to announce their new exhibition, Psychopts, a collaboration between Richard Hell and Christopher Wool. The exhibition will open with an artist’s reception on May 1st from 6 to 8pm, and run through June 4th.

The project emerged out of a friendship Hell and Wool share and focuses on their mutual interest in experiences associated with reading. Hell, a writer and avid reader, has for some time been assembling two-word groupings drawn from personal reading experience. Using a selection of these pairs he and Wool worked together making visual combinations of the word couples. They settled on 57 separate designs from which they developed six unique drawings in various media on paper, and nine silkscreen prints which will be published in a portfolio.

Christopher Wool’s paintings have long shown a fascination with words, exploring the tension of presenting them as visual forms rather than as linguistic signs with specific meanings. For the viewer a struggle ensues. Do you look at the painting or do you read it? And if you can do both, which is more important?

Richard Hell’s word couples show a similarity of visual appearance, yet conceptually are far removed in terms of meaning. The contrast between form and content is brought into dramatic relief. Hell’s discovery regarding these words – that as well as being an example of similar looking signs, one part is culturally, and indeed personally loaded, while the other is inoffensive to the point of self-eclipse – echoes Wool’s interest in the word image. This rift between sign and sense presents a rosy invitation for another of Wool’s ruminative investigations into the construction of a word image.

In some instances the partnership’s rendering of the word combinations presents a sort of rebus. An image that seems to invite reading scrutiny, an un-entangling of merged words, simultaneously playfully resists a mere reading and prompts a purely visual experience of the word. Almost irresistibly the completed image is evocative of the printed page and the conventions of graphic page lay-out and signage. Yet the final impression subverts these expectations, alerting us to the fact that we are viewing something other than a merely readable object.

The word associations suggest a process of subliminal connection. The reader, in a moment of peripheral observation, may have unconsciously summoned the word “incest” where the word on the page read “nicest”. It is a common enough reading experience and points to the relentless realm of the unconscious and its bid for acknowledgement at the expense of the conscious and ever-censorious ego. In a similar way, the artists’ prompts to view readable signs as merely formal, visual phenomena ask that we relax the ego drive and its penchant for rational interpretation so that we might experience more directly the impact of their compositions. While deploying the tools of the ordered, rational world, the artists are calling on the irrational, less ego driven senses to engage with these works.

The notion of chance or error is invoked and plays an important role in the works, whether by the visual accident in reading that summons the rogue association between essentially unrelated words, or by the suggestion of a printing or transcription error that runs two words over each other. The resultant impact of these different perceptions is significant. In the first instance we are called to look, to investigate more thoroughly, while in the second the instinct is to drop our attention, to look away. In both instances Hell and Wool would rather we paid attention, information being as bright, evasive and hard to hold as beading quicksilver.

Richard Hell is a musician and writer residing in New York. He was a seminal figure during the emergence of punk in the 1970s, leading up to the release of the influential album Blank Generation (1977) by Richard Hell and the Voidoids. He retired from music in 1984 to devote himself to writing. He is the author of two novels, Go Now, and Godlike, as well as a number of other books.

Christopher Wool is an artist living and working in New York City who makes paintings and prints using diverse media. He has published a variety of artist books featuring works with paint, print, Xerox and photography. His work has been widely shown nationally and internationally and is part of permanent collections at the MoMA, New York, the Tate Modern, London, Kunsthalle Basel, and Centre Pompidou, Paris, amongst others.