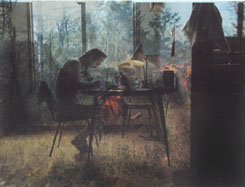 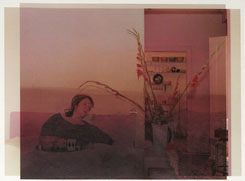 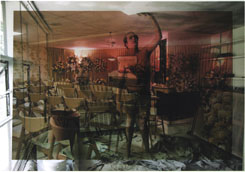 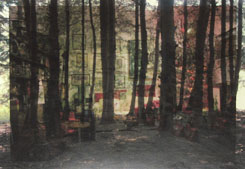 Taken from the contents of diCorcia’s 2003 book project, A Storybook Life, the works in this show were not made by any overt action on the part of the photographer, but came about accidentally as part of the printing process for the book. These images are the result of a proofing procedure typical in book publishing where a finite number of paper sheets are run through the press to ascertain sharpness of image, color absorption, and registration accuracy. The sheets are run through once on one side, flipped, run through again, and often re-flipped and run again producing a visual effect like a double exposure, an over-printing. Normally these pages are discarded once the printers are satisfied with the results, but diCorcia found himself captivated by the resultant imagery and held on to the proof sheets. Since then his interest in the special qualities of juxtaposed images which actually contact each other has developed. The layering effect, creating the proximity of ordinarily unrelated subjects, opens up greater worlds of narrative intrigue and complicates the field of meaning, two themes at the core of the photographer’s practice. From more than 100 impressions diCorcia has selected 20 for this show, presenting them as “found” artist’s works. In doing so, as well as broadening the confines of his traditional discipline, he elaborates on his own familiar concerns of subject and interpretation, of control and accident as they feature in the photographic process. In one image a scene inside a funeral parlor is overlaid with a photograph of a man standing in a low room who reaches up to touch the ceiling. Both in their own right are apparently commonplace enough images, but in combination they conjure an extra dimensional realm of narrative and interpretation. For diCorcia the contact of these two disparate images owns a peculiarly personal resonance as the overlapping figures portray his brother and his late father. An eerie “spiritual” flavor pervades. This overlay of figures from different photographs recalls a process popularly exploited at the beginning of the last century when portraits were devised that appeared to show spectral contacts between the sitter and deceased loved ones. This transcendental feel to diCorcia’s images is not without an ironic undertow given that these works exist merely by virtue of the fact of mechanical accident.

The “Storybook Life” element of these images is enhanced as we confront everyday scenes, already distinctly charged with diCorcia’s signature theatricality, now overlaid with a secondary scene. The mind and eye helplessly initiate a narrative connection, a story on top of a story, even while teasing apart the distinct details of one image from another. The picture spaces merge and new meaning is born in a world where objective rules struggle to prevail; interior becomes exterior, past invades present, and the cool impersonal scene crackles with a personalized sense of the moment. In these arresting impressions diCorcia has phrased the question neatly once again; are we looking at layers of imagery or just looking through the veils of our own experience?

Over the last thirty years diCorcia’s work has famously addressed the seemingly contradictory aspects of straight-faced documentation and personalized representation as they apply inherently to the acts of making and viewing a photograph. He has been widely acknowledged as one of the most influential photographers of his generation. The recipient of numerous honors and awards, his work has been shown at one person shows nationally and internationally, including at the Museum of Modern Art, New York; the Whitechapel Art Gallery, London; the Centre National de la Photographie, Paris; and the Sprengel Museum, Hannover. “The conscious and subconscious decisions made in editing the photographs is the real work of A Storybook Life,” diCorcia has said, but he might as easily have said it about his photographic process and its subject. More simply yet, the title of his book spells it out.