Peter Saville: Accessories To An Artwork 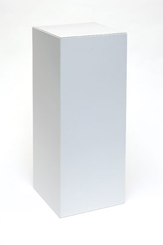 Glenn Horowitz Bookseller is pleased to announce Accessories To An Artwork, an exhibition by Peter Saville. Saville has designed a minimal white plinth, an artwork in the form of a pedestal of the sort that would conventionally be used to display an object in a museum setting, and has fabricated these plinths out of white museum board in an edition of 200. Approximately 20-25 of these will be distributed throughout the gallery space and a group of other artists, whose names appear above, have each been invited to place an object or artwork of their choice on one of the plinths.

Saville’s plinth provides a framework for a collaborative exhibition. It is an artwork which transfers the power of curatorial decision-making to others, namely the individual artists in the exhibition, but also to the individual collector who purchases a plinth from the edition. Saville once observed that, ‘it all looks like art to me now.’ This artwork recognizes that cultural authority is an increasingly do-it-yourself enterprise; the plinth is an accessory for the individual who has chosen to “curate” the world for him- or herself. By placing something atop the plinth one makes a statement as to what is worth looking at.

When Saville exhibited his work at the Migros Museum in Zurich in 2005 he designated the last room as “work in progress” and included objects that had little contemporary artistic currency, but that somehow still seemed pertinent as materials of an idea. Not wanting to present these objects as artworks, Saville laid all of them out on tables, with one exception, a plastic bird, which placed on a plinth. Noting the transformative energy of the plinth, Saville created this artwork so that others might share his experience.