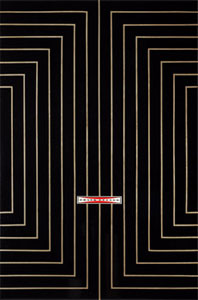 Black Boards, White Chicks consists of two series of works poised in an uneasy standoff. The black boards are from Dayton’s surfboard series, rectangular wood panels decorated with vertical stripes of color, meticulously crafted, lacquered and raised to a high gloss sheen. The surfboards draw equally upon the high-art tradition of post-painterly abstraction once championed by the cultural eminence Clement Greenburg, as they do upon the artisanal ethos of a much lower end of the culture, that of the surf bum painstakingly shaping a board in his workshop. This particular group, all compositions in shades of black, is a wave rider’s riff on Frank Stella’s black paintings. The white chicks are a new series of work in which Dayton takes images of performances by such feminist art pioneers as Hannah Wilke and Linda Benglis and combines them with back-of-the-magazine graphics from 900 number sex hotline ads. Schoolgirl stickers with sassy slogans are placed provocatively across these feminist icons’ bodies, declaring them “hotties” in loopy fonts and sparkles of color.

Peter Dayton’s work has always been deceptively decorator friendly. A blurb on the listings page for one previous show described his work as half Andy Warhol, half Martha Stewart. To describe it as friendly, to decorators or to anyone else, is to focus only on the works seduction and miss its subversion entirely. His intensely luscious surfaces mimic the enticements of luxury goods. The work does not just strive to be merely beautiful, but irresistible. When paired with this subject matter it demonstrates the way our culture regularly applies a marketing sheen to the most antiestablishment figures or outré subcultures, transforming them into readily saleable commodities or attitudes. This work is like a Halloween bag overflowing with candy; it is an overdose of sugar expressly designed to give the viewer a stomachache.

Peter Dayton was born in 1955 in New York City. His work has been the subject of numerous solo shows and group exhibitions.