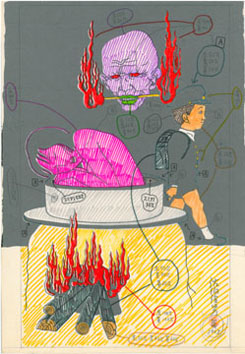 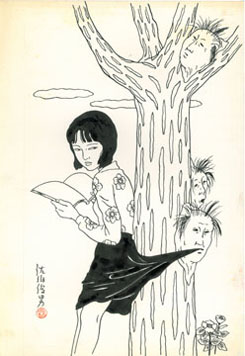 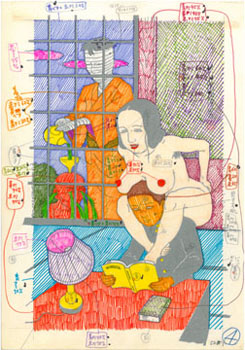 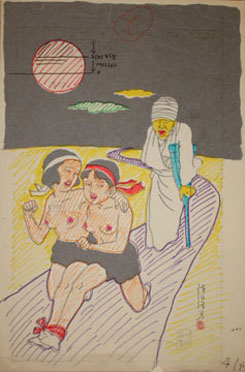 John McWhinnie at Glenn Horowitz Bookseller is very happy to announce our upcoming exhibition – Oedipal Indescretions, Edible Obsessions: Early Work of Toshio Saeki. Featuring original drawings made for print by the “godfather of Japanese erotica”, this exhibition showcases works by Saeki dating from the late 70s. The show will open Wednesday May 12th with a reception from 6 to 8pm, and run through June 12th.

Cannibalism, rape, and torture; perverse is merely a starting point for these vivid, fantastical tableaux of deviant sexual theater, laced with mutilation, horror, and dread. A singular artist in many senses, Saeki did not ever color his own works, but saw himself as part of the traditional partnership deployed by the Ukioy-e woodcut masters, which reserved separate roles for the artist (Eshi) and the printer (Surishi). The works on display are presented in the original working form, as black and white line drawings overlaid with vellum sheets marked with Saeki’s color plans for the visualized finished printed image. Saeki refers to his method of practice as Chinto printing.

The work is strongly characterized as Japanese in its depiction of typical interiors, clothing, and types. Saeki rarely tries to suggest a trans-national scenario or environment. He hones close to the physical world he knows and this lends the images – so surreally shocking in other ways – an added strength of impact. But the real language of these scenes derives from the unconscious and the world of dreams. The artist recalls his wish to illustrate his own scary dreams as a young man as part of the evolution of his work. As essentially Japanese as the scenes and characters may be, the graphic potency of what is shown and the themes addressed speaks directly to the viewer’s unconscious, those awarenesses typically kept out of sight from the censorious ego. The body as a site of pain, mortification, shame and betrayal, and as the victim and source of an uncontrollable sexual desire, is primary. The body dissolves or is split open to admit or release irresistible urges. Demons and bogies approach or assault from all sides and vulnerability and purity only prompt us to pity in the face of a predatory, perverse and pitiless fantasy world.

It is in no small part to the artist’s ability to push further into the realms of the taboo, to transgress further than fellow practitioners of the illustrative extremism so characteristic of contemporary comics and manga, that this work stands in a class of its own. “I’m just mischievous and like to surprise people… The more I produce the work, the more I want to top myself each time, to shock people even more.” In the past, in Japan, his books have received local government cautions from decency monitors. It would be difficult to conceive of U.S. censors taking such a lenient attitude, even by today’s standards. An explicit connection between horror and sexuality has become more mainstream in the last few decades, particularly with relation to popular cinema. The Japanese series of Ju-on horror films that began in the 90s pay indirect homage to the artist, featuring the somewhat malign child spirit Toshio Saeki, a witness of his mother’s murder at the hands of his father over sexual jealousy. Children and adolescents are a frequent presence in the artist’s work. The, to date, cultish following of Saeki’s oeuvre is about to readily expand significantly as public tastes catch up with his aesthetic. Apart from several shows of works in France (at the very first of which in 1970 all the pieces were stolen), the work has not been widely exhibited on an international platform. This exhibition offers a rare opportunity to view primary materials by the artist, with his printing notations and formulae, that are part of the process involved in creating a Toshio Saeki finished piece.