Neke Carson: Portraits from the Closet 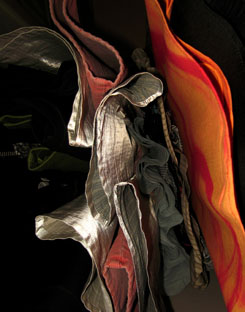 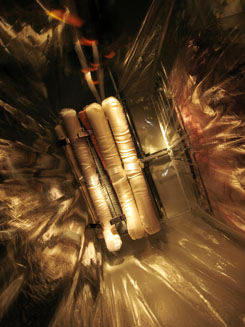 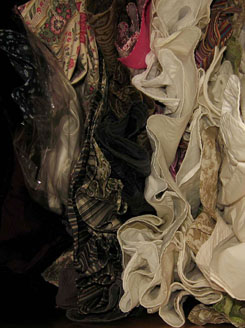 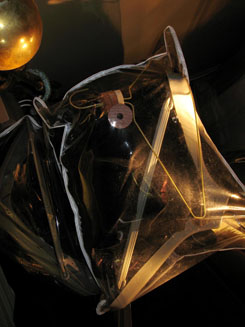 John McWhinnie at Glenn Horowitz Bookseller is very pleased to announce their new exhibition, Portraits from the Closet, by Neke Carson. The show will open with a reception for the artist on Thursday, July 16th between 6 and 8 pm, and will run through August 15th, 2009.

For some time now the artist Neke Carson has been dropping by on friends and leaving his camera on the floor of their clothes closets where it takes a timed photograph once the door has been shut. The resulting images present a perplexing angle of view and a picture that is not immediately readable. The viewer is reminded of something resembling submarine plant life, geological mineral strata, gaseous astronomical phenomena. Looming from the closeted darkness these swirling eruptions of color and shape, so surprising in form, seem in turn surprised in some clandestine nocturnal exchange. Dumb, stationary, what is normally hidden from thought or view is captured in the camera’s flash and the noisome imagery belies the pedestrian notion and tranquility of a simple closet interior.

It is perhaps a little more than of passing interest that Carson’s friends include celebrity names such as Debbie Harry, John Waters, Todd Oldham, Brigid Berlin and other “soon to be famous” personae of the caliber that invites a prurient curiosity. What would such people keep in their closets? The voyeur appetites are whetted. Carson’s art project answers the question with a dramatically creative, “Behold!”

As well as recording the contents of the subject’s closet, these images present peculiar instances of visual accord or conflict. Carson does not compose the closet contents in any way so the final image can be considered entirely accidental. Yet all sorts of drama energizes these mute spaces, from the silken, seductive come-on’s of Tracy Quan #1, through the vertiginous spectacle of Brigid Berlin #2, to the unsettling menace of John Waters # 2. And so Carson’s use of the term “portrait” seems not inappropriate. The randomness of the process is not without meaning to Carson. “I think of my camera as a mini Hubble telescope,” he has said. “The Hubble is pointed into different regions of the vastness of space, pictures are taken, and data is interpreted.” Alpha Centauri, or the stellar closet, the mystery of time and space holds sway, or as the Magi of yore were fond of declaring, “as above so below.”

Fresh from the Rhode Island School of Design, Neke Carson emerged into the art world with something of a bang when his sculpture, Moon Man Fountain, was shown by Andy Warhol at his Factory space in 1969. The piece, a large water-filled Plexiglas sculpture into which two people could sit as “statues”, was subsequently exhibited by Howard Wise and at the Museum of Contemporary Crafts, and was reviewed in Time magazine. In subsequent acts of creativity Carson could be seen cycling his Atomic Bicycle, “for people who like to ride around in an obsolete concept of the universe”; distributing his six-week art course, “Art Therapy for Conceptual Artists”; and, most notoriously, making a portrait of sitter Andy Warhol using a paintbrush in an unorthodox manner, an item from his “Rectal Realism” period. Fast-forward through a variety of other Carson periods as performance artist, kinetic sculptor, fashion photographer and critic, night club owner, apprentice jockey, New Wave modeling agent, and lounge pianist, and we find the dilettantish Dadaist poised to present his latest project, Portraits from the Closet.

The former Laureate Billy Collins has observed, “Whether you take this peculiar point of view as that of a voyeur or a child hiding (or locked) in a closet, Neke Carson’s snoopy camera certainly fulfills the old imperative that art shows us the ordinary from a new angle. These photographs put us in a place we want to be and do not want to be at the same time, and thus amount to a chillingly ambivalent invasion of privacy.”

Neke Carson was born in 1946 in Dallas, TX. He graduated from the Rhode Island School of Design in 1968 and moved to New York in 1969. He was active as a sculptor and performance artist throughout the early ‘70s and was the Director of Performances at the Robert Friedus Gallery for 1978. He has worked as an Art Director at Camera 35 and founded the modeling agency LaRocka in 1979, opening a nightclub/performance venue with the same name in 1980. In 1983 he began writing for the Village Voice contributing his own photographs for a series on fashion criticism. As a writer he has contributed to Mirabella, and Night Magazine, and as a photographer contributes to the Styles of the Times section of the New York Times. He is a director of performances at the Gershwin Hotel, NYC and is currently a regular pianist at several Manhattan hotel lounge destinations. In 2008 the Andy Warhol Museum, Pittsburgh hosted an exhibition of his selected works. He presently lives in New York City.