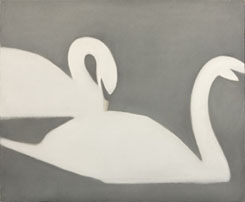 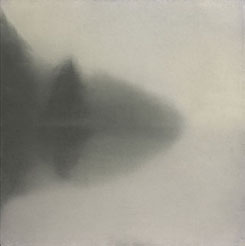 John McWhinnie @ Glenn Horowitz Bookseller is pleased to announce a new show of works by Mats Gustafson. The show, entitled Swan, will feature recent pastel drawings focusing on the image of swans gliding across water surfaces, alongside haunting landscape studies. Working with Maharam Digital Projects the artist has developed related designs for a stunning new wall installation which, courtesy of Maharam, will be on display for the duration of the show. A book publication, Mats Gustafson, Swan, by JMc & GHB Editions is planned for release in conjunction with the exhibition.

Following a singular, celebrated career in fashion illustration, where he has been called the heir to René Grau, the artist Mats Gustafson turned his attention toward less artificial subject matter, to Nature itself. Beginning in the mid-nineties Gustafson began to make watercolor studies and drawings of natural scenes – trees, rocks, landscape. Having honed his illustration craft to an almost extreme minimalism – emphasizing line and form over decoration and details – we find the same editorial eye at work in the rendition of natural subjects. Images are pared down to essentials of shape and color, with a bold yet subtle use of line providing the necessary surface drama. A series of slender tree trunks can be rendered almost like drips of color wash trickling down the page. The simplicity and apparent effortlessness of these images belie a shrewdness of glance and a steely control of his chosen medium. The final effect is one in which the viewer encounters something superbly refined and minimal, an almost spiritual apprehension of the subject, elevated out of time and space and resonant of a singular moment of vision.

In this series of pastel drawings, the artist foscusses on the motif of the swan. With its stark white plumage this creature is perhaps a natural subject for a minimalist eye like Gustafson’s. Graceful, long-necked birds glide over satin surfaces that retain the color only of reflection. In some pieces the dialogue is merely between darkness and light. But in his use of pastel, as distinct from watercolor, Gustafson has discovered a new softness of edge. His swan subjects have almost roughly described contours in these pieces, as if the hand that was tracing them were naïve, or uncertain. Or it may be that the softer edge describes more aptly the bird’s condition – partially submerged in another medium. And then again it is the nature of water to catch and reflect that with which it has contact, and this “roughness” of treatment is, more properly, another of the artist’s perceptive refinements. In some instances overlapping figures of birds can be read as merging together against the darker background, again suggesting a porousness of edge. The contrasting monochrome hues of the birds and their surroundings discover a wide range of formal and linear dramas carefully orchestrated and preserved within the signature sense of quiet that attends Gustafson’s best works. There is almost a palpable hush when we spend time before these pieces.

This sense of silence is echoed in the misty landscapes presented in the show. The artist has almost dissolved form in a series of impressions of land heads reaching down to water. A sense of form through formlessness pervades, almost a quivering between abstraction and figuration, between body and spirit. This step towards the abstract is heightened when we encounter Gustafson’s “water” studies which emerged during this project. Here we are faced with pure, monochrome abstracts, which in point of context we read as representations of water. The mind shows us one thing, the eye another. At once inviting and ominous they represent new portals into perception and the quest for reality, bound or limitless.

Mats Gustafson was born in Sweden in 1951, but as befitting an international talent, has spent much time living abroad, chiefly in New York and Paris. He began his career as a fashion illustrator at the end of the 70s and throughout the 80s his distinctive minimalist style was much in demand by the likes of Vogue, Interview, Marie Claire, The New York Times, and The New Yorker , amongst others. His work was also used for advertising campaigns by fashion houses such as Chanel, Romeo Gigli, Geoffrey Beene, Comme des Garcons, and Yohji Yamamoto. His use of watercolor was highly innovative in the world of commercial graphics and his approach seemed to blur the line between the notion of the commercially graphic and the purely artistic. As a result his work has been exhibited widely in Europe and the U.S. Several publications have been released, including Drawn by the Sea (with Ted Muehling, 2000), Mats Gustafson 1989 – 2001 (2001), Rocks (2003), and Pictures (2006). In 2006 John McWhinnie @ GHB exhibited his widely acclaimed show, Deer. A publication of the same name, based on this exhibition, was produced by JMc & GHB Editions. The artist presently lives and works in New York City and Sag Harbor, NY.