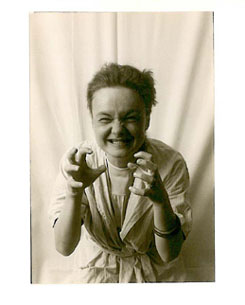 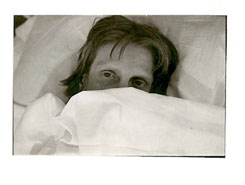 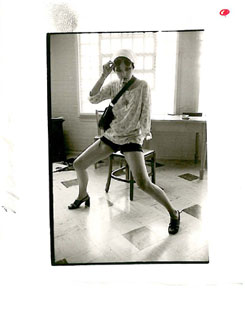 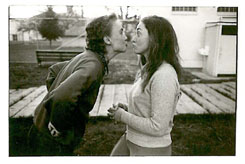 First published to wide acclaim by Fireside in 1979, Mark’s Ward 81 announced the arrival of a brave new photographic talent and heralded the beginning of a luminous career in documentary photography. The book sent shockwaves through US societal attitudes toward the mentally ill, their care and rehabilitation, and served to broaden the very definition of documentary as it applied to the photographic process. Emerging against a backdrop of the newly empowered feminist movement, emboldened by the posthumous success of Diane Arbus’ work, the widely viewed Milos Forman film One Flew Over the Cuckoo’s Nest, and a political awareness of the treatment of women at the hands of a predominantly male psychiatric establishment, the book is truly a social cultural benchmark of its time. Today it still stands as a singular testament of the fragility of the individual in the face of state institutional authority.

In many ways this, her first sustained personally elected project, set the standard for the work that was to follow in a career spanning four decades. With regard to approach, subject matter, and engagement Ward 81 presents all of the photographer’s guiding aesthetic principles, signaling a rare early artistic maturity in someone who had been working professionally for barely a decade at the time.

Ward 81 is a record of the day to day life of a group of female patients in the secured wing of an Oregon mental hospital. Along with the writer Karen Folger Jacobs, Mark spent 36 days living in the facility, sharing the routines of the inmates, growing close to them, and photographing them. It was a project she had pushed for over the course of several years after an experience she had had in 1971 shooting still footage for Milos Forman’s evolving film project One Flew Over the Cuckoo’s Nest. She had talked her way into that role, offering her services for just equipment expenses without pay as the film had no budget for a still photographer. During the undertaking she learned of the locked ward, number 81, where female patients considered dangerous to themselves and to others, were kept in isolated though not solitary confinement. It was, however, not until February 1976 that she was permitted access to the ward. This tenacious persistence in tracking projects was to become characteristic of her approach to shooting personal work. As was the degree of complete immersion in the environment of her subjects, requiring in this instance extended periods of time getting to know the women and their world, and finding the photographs she wanted only after a special relationship of trust and interaction had been established. She has said that her quest is to capture “something that I feel is at the core of people”. As such, beginning from this emotionally attuned starting point, her work broadened the definition of so-called documentary photography which traditionally required an impersonal approach. While stressing the personal in her work Mark is always reaching for the universal spirit in the particular instant. It is this insistence on the universal which preserves the work from teetering over into the realm of sentiment. Though the images in Ward 81 are riven with powerful feelings, many tinged with tragedy, nothing becomes just an example of mawkish emotionality – be it sorrow, anger, or joy.

Coming off a regular money-earning beat photographing actors during film shoots Mark was wise to the moment of feigned feeling, in her subjects and in herself. For her the choice of the mentally ill was motivated by the sense that they embodied uncensored feeling – “the feelings were so much more exaggerated”. But it is a rare eye that can record such instances of unfettered emotion without being swept away in the current.

Her election to use black and white film was also prompted by this desire for the pure image. She has said that color photography holds the additional challenge of introducing sensationally heightened and unconsciously decorative elements in the construction and interpretation of the image. Opting for a honed black and white medium she concentrated the instant and the feeling into monochrome pictures. Given the discipline of this format the result is all the more remarkable in its range of feeling and revelation.

In contrast to the people she had previously been paid to photograph, these subjects were not celebrities, but as she later dubbed them “the unfamous”, people on the fringes of society and, in this case, those purposely consigned to and held without choice on the margins. But Mark does not come here to merely sympathize with the individuals, to angrily accuse society of victimization, or mourn the remoteness of their lives. She pushes past such easily aroused senses of social injustice and pity to present instances of camaraderie, joy, humor, and creativity. These women, surrounded by ashtrays, lounging listlessly before a television or passing down corridors in restraints, their limbs scarred with evidence of self-mutilation, are obviously not in a good place, but they are presented as three-dimensional people. Mark captures moments of enthusiasm and engagement, rebelliousness and reflection. The urge to fully humanize her sitters is primary, not merely present them as quickly grasped ciphers for simple pathos.

While aesthetically she insists that every photograph should be able to stand on its own merit – she is a demanding technical photographer – Mark’s preference to immerse herself for long periods at a time in the project she elects speaks to the notion that she desires her audience to spend time inside her work. For any photographer editing down a group of images into just a select few for publication can be excruciating, especially given the degree of emotional investment the work represents. In this exhibition viewers are given a unique opportunity to go further with Mark’s Ward 81, to delve deeper into her process of insightful recording and revelation. More than fifty additional images not included in the original publication will be on show, offering an extended look into the world of the ward’s residents, and a closer contact with the shutter genius of the photographer.

Mary Ellen Mark is the recipient of numerous national and international awards for photography including the Robert F. Kennedy Journalism Award, Photographer of the Year Award from the Friends of Photography, the Creative Arts Award Citation for Photography from Brandeis University, and the George W. Polk Award for Photojournalism. She has received three National Endowment for the Arts grants. Her work has been published widely in the U.S. and abroad, featuring in publications such as Life, The New Yorker, Rolling Stone, and Vanity Fair. Books published of her work include Passport, Ward 81, Falkland Road: Prostitutes of Bombay, Photographs of Mother Teresa’s Missions of Charity in Calcutta, and Streetwise.