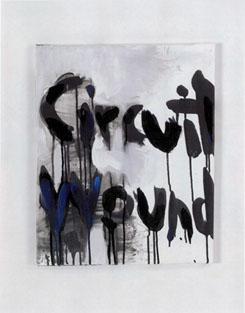 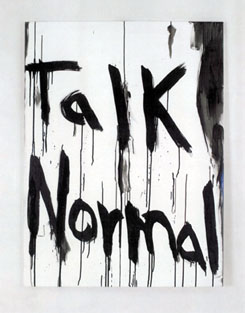 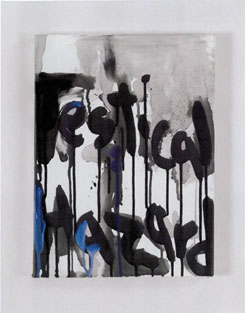 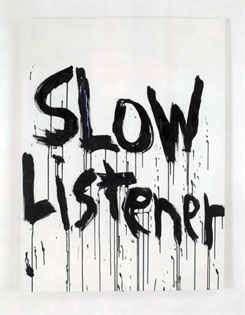 Featuring a series of works on canvas and on paper the show presents Kim Gordon’s recent explorations using paint, lyrics, and personal catch phrases to create a collision of the verbal and the visual, and the discovery of something quite other. One of the original band members of musical group Sonic Youth, it is as a front line guitarist and vocalist that Kim Gordon is more widely celebrated in cultural circles. The band formed in 1981 and quickly established itself as the source of an energetic, raw new sound deploying alternative tuning and creative methods of noise production.

Emerging from the 1970s No Wave scene of New York City, they were highly influential in evolving an alternative musical ethos for rock musicians of the period and those following. Gordon and the other band members were originally art students and from an early stage there was a natural overlap between the worlds of art and music. The group’s sound and performance style pushed at the boundaries of conventional rock music presentation, rigging guitars with DIY-style add-ons in order to achieve particular effects, and playing them in unorthodox ways. This essentially pragmatic engagement with the limits of an instrument’s capacity is echoed in Gordon’s plastic artworks. There is a focus on the material in hand – liquid pigment and paper – and an engagement with the very extremes of the materials’ interactions. Facial features and likenesses are all but eclipsed by the freely handled paint and color, teetering on the brink of self-effacement. In a similar manner Gordon subjects her very themes to the perils of disintegration. Loosely painted words have dripping edges and bleeding contours that threaten to disrupt or annihilate the sense within. There is the feel of un-stylized urban graffiti, of the anonymous, spontaneous scrawls encountered in the profane world. The gesture, the moment of creation, with all its attendant expressiveness is paramount. And yet, as lyrics, and personal catch phrases, Gordon has produced these words before, on paper and on canvas. They are like personal mantras, surfacing repeatedly at moments of creative charge and expression. Based on the names of noise bands, there is a sense of homage, as well as obsession. From the provocative (16 Bitch Pile Up) to the banal (Wet Hair) by way of the more obscure (Sudden Oak), in The Noise Paintings the words find a new unique form each time the artist commits them to a surface. The process recalls the experience of the performer who draws from a repertoire again and again, but each time the delivery is essentially, uniquely distinctive.

A graduate of Otis College of Art and Design in Los Angeles, Kim Gordon was contributing articles for Art Forum at the beginning of the 80s and worked in several NYC galleries. In 1982 she curated a show at White Columns Gallery which featured work by Mike Kelley and Tony Oursler, among others. As well as music and art production, she has been involved in film making – direction and acting – and in fashion design and publishing. Her artwork has been shown throughout the US as well as in Europe and Japan. Some recent shows have included Portaits #17-37, Iguapop Gallery, Barcelona 2007; Come Across, at KS Art, New York 2008; Rock Paper Scissor at Robert Berman Gallery, Santa Monica 2009. She currently lives and works in Northampton, MA. In partnership with Ecstatic Peace Library, JMc & GHB Editions will introduce a special edition of a new artist’s unbound, signed and numbered portfolio, Kim Gordon, The Noise Paintings. Drawn from a full edition of just 200, the special edition will comprise 26 lettered copies enclosed in a custom cloth box with an original painting and recording laid in.