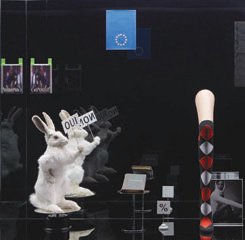 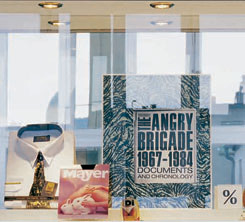 John McWhinnie @ Glenn Horowitz Bookseller is pleased to present an installation by Josephine Meckseper. In her photography, videos, and object-based installations Meckseper engages with the manipulation and attendant imbalance of power created through the promotion of such culturally sanctioned vices as greed, excess, and corruption. Recurrent images of political activism—whether photographs of demonstrations or newspaper cuttings—are set against sparkling consumer goods and advertising motifs. Rather than aestheticizing, and thus glorifying, the seductive power of these themes, Meckseper instead “challenges ingrained perspectives” with a conceptual approach that seeks out ways of articulating and interacting with the world, while purposefully degrading and devaluing the visual idiom associated with contemporary consumer culture. Recently, Meckseper has pursued the capitalist-critique method, with subject areas agitating around the war in Iraq and the oil industry, with their inherent economic and socio-political implications, in particular those concerning the automobile industry.

The installation series coincides with the publication of Meckseper’s new monograph from JRP/Ringier. This title focuses on a new series of object arrangements which recalls the window displays of department stores and expensive boutiques, using such disparate items as silver mannequins, raccoon tails, photographs of muscle cars, and toilet brushes. These objects are all exchangeable signifiers of consumerism, and Meckseper infuses these elements with “a sense of de-fascination” and instability by favoring a “non-affirmative” mode of representation. The artist will be signing copies at a reception hosted in her honor Thursday, Sept. 24th from 6 to 8 p.m. in the gallery.

Josephine Meckseper was born in 1964 in Lilienthal, Germany, and received her Master of Fine Arts degree in 1992 from the California Institute of Arts in Valencia. She has lived in the United States for nearly twenty years, currently living and working in New York City. Her work has been included in such prominent exhibitions as New Photography 2008 at the Museum of Modern Art; Prospect 1 New Orleans; That Was Then . . . This Is Now at P.S.1 Contemporary Art Center in New York City; the international touring exhibition USA Today: New American Art from the Saatchi Gallery; the 2006 Whitney Biennial Day for Night; and a significant retrospective at the Stuttgart Art Museum (Kunstmuseum Stuttgart) in Stuttgart, Germany. Meckseper will premier her first major solo exhibition in a Texas museum at Blaffer Gallery in Houston in September 2009.