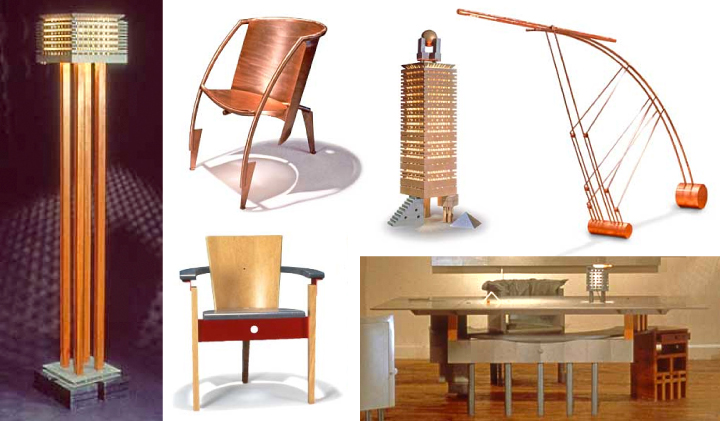 RARE’s next exhibition will focus on the work of New York City-based architect James Evanson. A vintage collection of Evanson’s 1980s furniture and lighting designs—including his unique light sculpture Galileo—will be on display from February 19 through March 14, 2015, as well as framed examples of his graphics work, original drawings, and related archival material. This will be Evanson’s first solo show since 1984, and the first to present the full scope of his creative output.

Born in Montana in 1946, Evanson began his studies at the Art Center College of Design in California, where his silkscreens and concrete wall sculptures were exhibited at the Los Angeles County Museum of Art. He continued working in these mediums after moving to New York in the mid-1970s—exhibiting at such galleries as OK Harris—but also opened a design consultancy named Blueline & Construction, which offered both architectural services and custom-built furniture, including a line of wooden flat files that caught the eye of Art et Industrie founder Rick Kaufmann, who started offering them in his ground-breaking SoHo showroom.

Inspired by the success of that venture, Evanson pursued an architecture degree at Pratt Institute and subsequently expanded his range of production, combining architectural elements, applied graphics, and unusual materials into unique furniture and lighting designs which Interior Design magazine praised as “very much au courant, very much ‘New Wave,'” yet also at “the vanguard of what later was to become a pronounced style.” Asked to discuss his process in a 1986 New York Times article, Evanson stated, “Decoration should be integral to the shape of furniture and buildings…. To make art is simple, but to make art furniture means integrating many aspects so that the whole piece is not arbitrary and whimsical, but holds together.”

In addition to the pieces on display, RARE will also be offering a number of more recent works through a special consignment with the artist, as well as signed, limited editions of his prints.