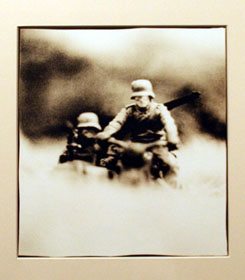 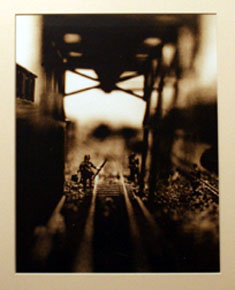 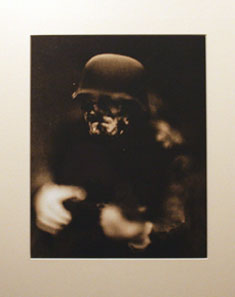 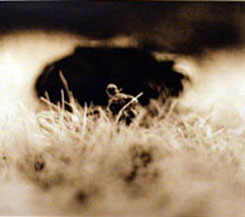 John McWhinnie at Glenn Horowitz Bookseller is very pleased to announce their latest exhibition, David Levinthal: Hitler Moves East. Vintage Photographs. The show will open March 18th with a reception for the artist from 6pm to 8pm, and run through April 26th. The exhibition, drawn from Levinthal’s project of 1977, a joint production with Garry Trudeau of Doonesbury fame, will feature new installation work, vintage photographs, and the original publisher’s book macquette. In the form of installation pieces, photographs, and a publication, Hitler Moves East was initially produced as a college project while the duo were in art school at Yale. For Levinthal, then 28 years old, the work heralded the beginning of a distinctive formal and stylistic approach to photography.

Using toy soldiers, constructed dioramas, and HO models of railroads, bridges and buildings, the pair endeavored to recreate a documentary style account of Hitler’s 6th army’s irresistible push into the USSR over the course of 1941-42, and their eventual rout and surrender to Soviet forces in the winter of 1943. In the publication that emerged, Hitler Moves East; A Graphic Chronicle, 1941-43, photographs, illustrations, and text excerpts are carefully arranged in a sequence that describes the unfolding campaign, from initial triumphant beginnings to war-weary final defeat. The photographs, with sepia tones and grainy resolution, ape the prevailing style of the era’s reportage photography, invoking the celebrated battle field images of Robert Capa, amongst others. Against skillfully crafted backdrops Levinthal’s photographs deploy a constricted depth of field and a narrowed focus rendering his images all the more illusionary in their ability to suggest a war torn realism. Within the context of this project these depictions discover a new dimension for photography, one where the camera’s capacity to both accurately record and seductively suggest is pointedly married to our appetite for constructing documentary and composing narrative; in short, for formulating history.

These artfully composed tableaux – artificial in every sense – through the medium of photography, are transformed into something with a very real impact, something flushed with feeling and coursing with a sense of verité. Levinthal has said of his work that “there’s less in my photographs than meets the eye” and it is this canny understanding of the viewer’s basic inability to sift the visual fact from its personal resonance that has emerged as a central theme in his work, informing almost three decades of projects which have regularly generated a storm of controversy.

When Levinthal and Trudeau’s slyly crafted publication first emerged in 1977 the authors were astonished at how quickly people believed the images were actual war photographs. Bookstores routinely placed the book in the history and not photography sections. This sort of myopic response is certainly a valid reaction to the artistry in Levinthal’s photographs, but it is not intrinsically the sort of scrutiny his work courts. He wants the viewer to peer into the photograph and perceive the artificiality at work there, but in so doing to catch something of the truth which is leaking from these creations; vision is not a unilateral process, but a dialogue between viewer and viewed. Truth and artifice are not diametrically opposed, but complexly related and interwoven.

A new publication, Hitler Moves East; Artist’s Cut, has been published by JMc & GHB editions to accompany the show. The forty-four page, paper bound book features reproductions of original photographs produced for the project of 1977, as well as illustrations from research source materials used. Featuring works not included in the original publication, Artist’s Cut represents an artistic reworking by the photographer of the seminal themes which made the original a cultural touchstone. A deluxe edition of this publication will also be made available and will include an original piece of artwork.