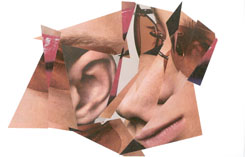 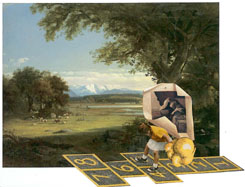 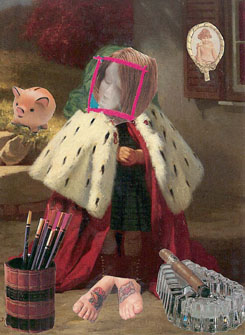 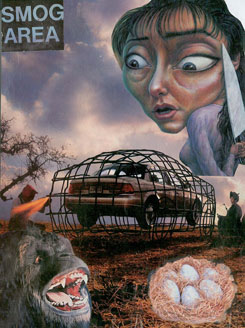 John McWhinnie at Glenn Horowitz Bookseller is proud to present the works of artists Claude Pelieu and Mary Beach.

The place of collage in the aesthetic of the Beats is crucial, pointing to the attunement of these creatives with an emerging sensibility and style inherent in the culture of that era. The increasing omnipresence of television and magazine style presentation, with the move towards the instant phenomena, the hybridization of “high” and “low” or “pop” culture, the 15 minutes of fame, the remote control, the sound “bite”, is all well understood in collage. In such terrain Pelieu and Beach mined their material. Though there is a basic similarity in the raw components of their work – sources and styles – each takes a very different approach. Pelieu’s work is characterized by intricacy of color combining, care in cutting and almost a blending of elements, while Beach’s work displays a much more direct, almost confrontational sense, aping the conventions of the magazine style while mocking it. Pelieu cuts into his imagery to subdue and quiet the shrillness of the magazine ethos, while Beach works to actually amplify the clamor of contemporary media address.

Displaying a pointed critique of gender ideals and representations, Beach’s works seek to unmask the identity of both advertiser and consumer. Masks are ever present in the works of 2001, either literally, implicitly in the focus on cosmetic idealizations, or in the frequency with which she obliterates parts or all of the face. A personal symbology seems to emerge in the reoccurring motifs she deploys – snakes, apples, Eden, felines, children. Questions are posed about female identity utilizing imagery that purports to answer questions on the subject. There is a sardonic humor at play, exuberantly mocking the ideals of commercial advertising imagery while pushing for serious re-evaluations.

Pelieu’s work by contrast exhibits a more considered complexity of composition. Components are cut and arranged with greater concern for density of image and harmony of form and color. Here are the notes of cubism, futurism and deconstructivism French critics have referred to, works alive with particularity of feature yet artfully finished as integrated wholes. Image and outline, form and content are skillfully separated from one another then expertly recombined into new forms with subtler, more complex content. Splintered images unfold across the page in compositions that breathe time and motion into the work; at times the result is almost cinematic.

In this collection by Pelieu from 2001 the joyful, sinuous outlines of figure groupings in works preceding September 11 are a stark contrast to the work following. Though he was not in New York city at the time Claude began to title works “NY September 2001” in the wake of the calamitous attack on the World Trade Center. The cut segments straighten out dramatically into hard-edged geometrical wedges. Edges are pointed, sharpened, severe. The first piece entitled “NY September 11 2001” is just a jagged pile of gray textured shapes, collapsed into a rubble upon itself. The human element, parts of a face, is reduced to a minimum and a bleakness prevails. Following works introduce color, but the pallet is somber and restricted, evolving in some compositions to show a marked fondness for grey, black, and blood-red hues. The two other compositions entitled “NY September 11 2001” open up from the despondency of the first, deploying color and rhythmical elements but each depict subtly disturbing features. One shows two parts of a smiling woman’s face separated by an image of an exploding building, the other shows partial snippets of a masked man using a cell phone and the bitter inclusion of the logo of a popular cigarette, “Lucky Strike”. But in later pieces we see Pelieu’s engagement evolve. The work entitled “NY September 13 2001” manipulates fragmented pieces of facial close-ups which though displaying a fractured visage presents a haunting, tender meditation on human fragility. “NY September 15 2001” again strikes a more hopeful note with its soft, Spring-like greens, its up-beat rhythmic pace, and the toy bird poised on a figure’s hand in what must be read as the final segment of the composition. In this NY September 2001 sequence we have what amounts to a diary of one artist’s response to the momentous devastation of the time.

The artists first met in Paris in 1962. Claude was 28 and Mary 15 years his senior. Mary gave Claude a copy of Allen Ginsberg’s Reality Sandwiches and a correspondence with the poet ensued. Shortly thereafter, with encouragement from Ginsberg and Lawrence Ferlinghetti, they moved and settled in San Francisco working at City Lights publishers and turning their hands to writing, editing, translating, publishing and book illustration. Mary is credited with discovering the work of poet Bob Kaufman whose work, along with work by William Burroughs, she eventually published under her own imprint, Beach Books (Mary was a relative of Sylvia Beach, the enterprising book dealer who first published Joyce’s Ulysses.) Claude at this time was also involved with writing, producing poetry volumes of his own which deployed the cut-up and re-arranged text practice made famous by Burroughs. They eventually forged close friendship and work bonds with Ginsberg, Ferlinghetti, Burroughs, Charles Plymell and Brion Gysin. In 1965 they moved to New York city and by 1969, while living in the Chelsea Hotel, they could count among friends and colleagues Ed Sanders, Harry Smith, Robert Mapplethorpe, and Patti Smith. Frequent travelers, they spent time in France and Britain and in 1975 they married and settled in upstate New York where they lived, working ceaselessly, until their deaths in 2002 (Claude) and 2006 (Mary).