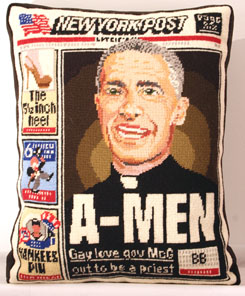 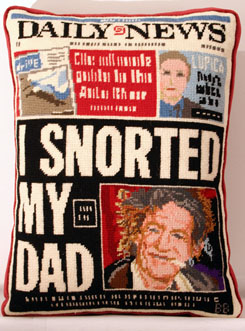 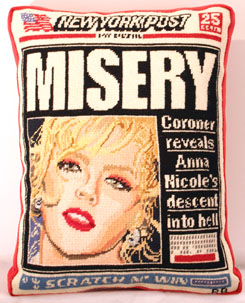 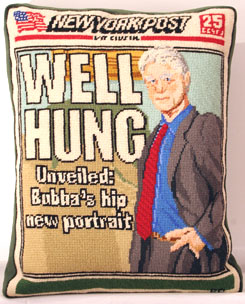 John McWhinnie at Glenn Horowitz Bookseller is delighted to announce their new exhibition, Brigid Berlin, Needlepoint. Featuring a selection of Berlin’s needlepoint work of the last ten years the show will open Oct. 21st with a reception for the artist between 6 pm and 8 pm, and run through Nov. 22nd.

It is not uncharacteristic that Berlin in later years has turned to the traditionally ladylike craft of needlepoint to create work that continues to challenge the social status quo, defy convention, and pose questions about taste and society. An avid consumer of tabloid newspapers, the “popular press” as it’s referred to in Britain, she translates front page headline broadsheets into genteel features of interior décor. Her subjects are typically crude, salacious paper-selling press announcements in origin designed to appall, shock, and titillate viewers. The meticulously executed needlepoint pieces transform the daily ghastliness of news occurrences and media spin into demure domestic objects of quaint design and questionable comfort. News products designed for a momentary frisson of engagement are rendered into soft edged but durable monuments that outlive the typical transitory lifespan expected of such unpalatable printed exclamations. Only, perhaps, by virtue of their fleeting existence – bought one day and consigned to the garbage the next – do we routinely tolerate the raging excesses of the contemporary newspaper industry. Plush and tactile as the finished works might be they defy any but the hardiest to cozy up to them. Sweetheart cushions they are not.

As carefully executed as they are the pieces invoke the traditional feminine practice of needlework when young girls were taught sewing skills and writing together, producing bland yet cheerful decorative samplers of prayers and pieties. Along with Annette Messager, Louise Bourgeois, Richard Saja, and Mark Newport, Berlin is not alone in her selection of a gendered craft like needlework to explore issues of cultural identity and engagement. Needlepoint, the province of women’s work for centuries, has traditionally been excluded from the canon of the fine arts, possibly by virtue of the fact of its gender specificity. In laying claim to this work as art Berlin holds fast to the principles of works produced in the sixties and later that refer directly to her gender – topless performance work, mono prints made using her breasts, and penis autograph books. Even still, these completed needlepoint “cushions” occupy an uneasy, undetermined space; is it art to be hung on the wall, or to be displayed on the couch? Is it a type of painting, or a form of soft sculpture? Alas such questions cannot all be so neatly sewn up into tightly stitched answers.

Brigid Berlin is the daughter of Richard Berlin, who directed the Hearst media empire for 52 years. Though raised in elite social circles, Berlin became a self-described “troublemaker” and spent most of her life reacting against, and sending up, the social conventions of her youth. She met Andy Warhol in 1964 and was soon drawn into the downtown social set centered at the Factory. Berlin became a member of Warhol’s inner circle and a personal confidante. She appeared in several Warhol films, including Chelsea Girls (1966), Imitation of Christ (1967) and The Nude Restaurant (1967), under the name Brigid Polk. Her skill at administering “pokes” (amphetamine injections) to herself and other hangers-on about the Factory earned her this name. She acquired the taste for speed at age eleven when her mother had the family doctor prescribe Dexedrine and amphetamine so that she would lose weight. Berlin continued to use speed through most of the ’60s, until laws about what could be prescribed changed and her habits changed as well.

Like Warhol, Berlin obsessively used the new technologies of the day to document her own life. She carried a tape recorder with her everywhere and made tapes of conversations and performances. She documented the artistic milieu with her Polaroid camera and these shots offer a rare glimpse into life at Warhol’s Factory. Unlike Warhol, who used the least complicated camera equipment available, Berlin always employed the latest and most innovative technology. She made portraits and still-lifes in double-exposure, a feat not previously achieved with a Polaroid camera. These photographs were the subject of a large exhibition at Heiner Friedrich’s gallery in 1971 and later at the Gotham Book Mart. An extensive exhibition of her works of the last 40 years – photoworks, prints, notebooks, needlepoint – was shown at John McWhinnie in 2006. She presently lives and works in New York City.