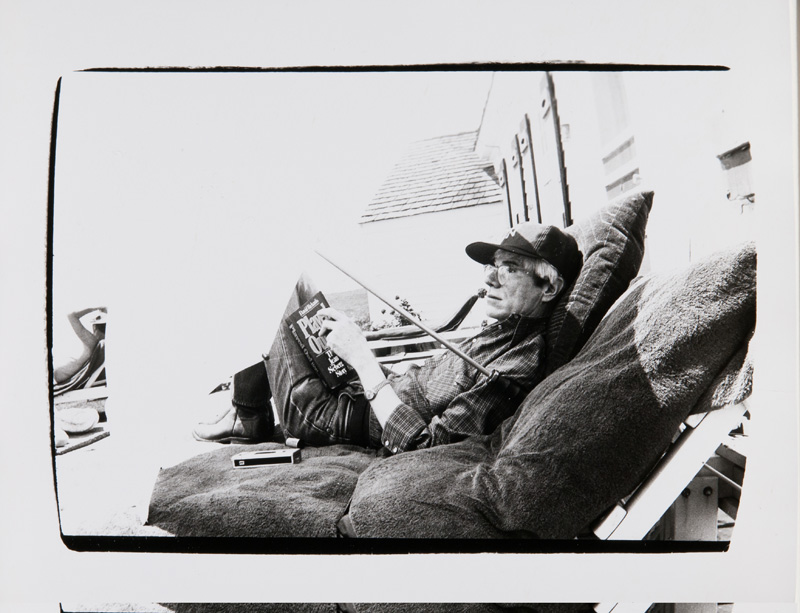 In his book America Warhol said of Montauk that it had the two things all the great American resort areas have, “physical active stuff like swimming, skiing, cycling, running and sex, and the feeling that, after you do all those things, there isn’t anything else to do so you might as well just relax.” Of course Warhol himself could never really stop working, even as he relaxed, and with his Polaroid camera, or a 35mm loaded with black and white film always at hand, the time he spent in Montauk was constantly recorded.

Nearly all of Warhol’s artworks were based in photography, and to a nearly equal degree, in his own “social networking” (well before the term was coined). When the artist died in 1987 he left behind thousands of images documenting the social whirl of his life. This exhibition features over 30 unique photographs created during Warhol’s tenure at Eothen, his famed estate in the Montauk Moorlands. Primarily portraits, the works feature celebrities such as Keith Haring, Mick Jagger and Warhol himself over the span of seven years, 1979 – 1986.

Polaroids of Henry Geldzahler, William Burroughs and Keith Haring, perhaps taken as source material for VIP portraits, are arresting images in their own right, while black and white snapshots like Montauk, Halston with American Flag (1982) casually capture his iconic guests at leisure. Alternatively, party pictures featuring celebrities such as Elizabeth Taylor and Grace Jones vignette the subject in a frenzy of well-dressed party goers.

According to Christopher Bollen, editor at large of Interview Magazine, “Warhol was one of the most ravenous social animals of the second half of the 20th Century. It is nearly impossible to strip his artistic contribution from the whirlwind of clubs, connections, factory goings-on, and a protracted longing to be at the center of the social storm… But alongside these public displays are frozen deeply personal moments, where the camera catches the trajectory of Warhol’s emotions, love and beauty, romance and friendship. These photographs are startling accents in the Warhol vocabulary, as much for their sentient aesthetic as for the humanity that underwrites them.”

Altogether, the geographically specific cache of unique images in Andy Warhol: Montauk Photos offers a rare view of the artist, his friends and collaborators in true Montauk repose.