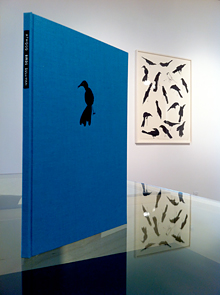 A limited edition book featuring bird drawings by Billy Sullivan and an essay by Margaret Atwood.

Artist Billy Sullivan lives and works in New York City and East Hampton, NY. He has exhibited extensively since the early 1970s, and is in the collections of New York’s Museum of Modern Art and Metropolitan Museum of Art, among others. Sullivan has been documenting the avian activity in his wooded backyard from his East Hampton dining room table since 1990. In these drawings, Sullivan captures the social goings-on of East End birds in much the same way he has chronicled family and friends in his paintings.

Margaret Atwood is a Canadian poet, novelist, literary critic, essayist, and environmental activist. Throughout her writing career, Margaret Atwood has received numerous awards and honorary degrees. She is the author of more than fifty volumes of poetry, children’s literature, fiction, and non-fiction, and is perhaps best known for her novels, which include The Edible Woman (1970), The Handmaid’s Tale (1983), The Robber Bride (1994), Alias Grace (1996), and The Blind Assassin, which won the prestigious Booker Prize in 2000. An avid birder and respected conservationist, Atwood is co-honoary president — with her partner Graeme Gibson — of the Rare Bird Club within BirdLife International.

The entire edition, published in conjunction with the exhibition BILLY SULLIVAN: BIRD DRAWINGS, consists of 450 copies, 350 in wrappers, and 100 deluxe cloth-bound copies signed by both the writer and artist.